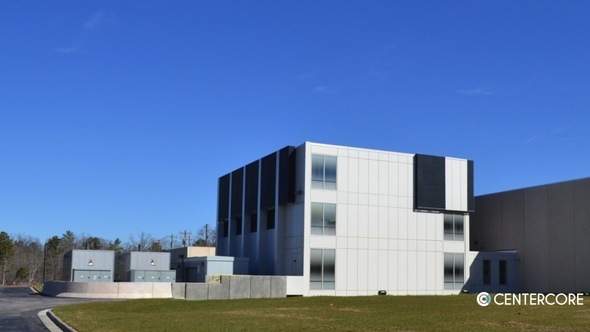 Centercore, a flexible datacenter design created by Fidelity Investments, allows enterprise organizations to build out datacenters in smaller 500-kilowatt increments. This approach differs from a traditional datacenter build out where the entire datacenter is built at once, leaving space for future growth.

The incremental design, according to Fidelity, can save 10% to 15% on construction costs alone.

Centercore’s stacked structure reduces a facility footprint, allowing organizations to install more computing power on less real estate. This multi-story facility has the power on the lower level, the data hall in the middle and the cooling on the top level. Centercore is being used at Fidelity locations to expand their traditional (raised-floor) datacenter facilities.

This Centercore facility is attached to an existing datacenter to supplement the main center’s existing compute capacity. This facility is 7,000 total square feet with 2,000 square feet of open white space raised floor area for technology equipment. It provides 500 kilowatts of redundant power, and is 30% more energy efficient than the existing data centers. It has been live in production since the end of 2012. Greg MacSweeney is editorial director of InformationWeek Financial Services, whose brands include Wall Street & Technology, Bank Systems & Technology, Advanced Trading, and Insurance & Technology. View Full Bio