50%
Tweet
In light of the Knight Capital disaster, buy-side traders have to ask if their broker algorithms are safe -- before they blow up the market.

With all of the trading algorithms that are running out there -- accounting for as much as 73 percent of all trades in 2011, according to an independently sponsored lecture on the impact of algorithmic trading that was part of New York-based TED's conference series -- the chances that an automated trading formula would go rogue were pretty high. 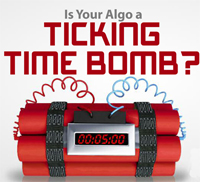 With automated trading accounting for as many as three out of every four trades on Wall Street, a crash brought on by a rogue algorithm was perhaps inevitable. Following the Knight Capital disaster, Advanced Trading's October digital issue examines the question that every buy-side trader should be asking: Are broker algorithms a ticking time bomb?

As everyone knows by now, market maker and execution service provider Knight Capital deployed on Aug. 1 a brand-new trading algorithm that almost immediately went haywire. In 45 minutes, the algo sent out erroneous trade orders that forced the firm's traders to halt trading and unravel losses to the tune of $440 million. (At press time, the losses had swelled to more than $600 million, forcing Knight Capital to look for private equity from Blackstone Group, Jeffries Group, Stifel Financial Group, Scott Tradeand Getco, a former competitor.)

As Knight Capital scrambles to trade another day, the popularity of high-frequency trading via complex trading algorithms provided by sell-side firms, technology providers and broker-dealers should be forcing the industry to confront an important question: How can the buy side trust third-party algorithms?

Buyer beware. According to hedge fund managers, that age-old warning has never been more true.

"We all use algorithms, and we use them for good reasons," Patrick Morris, CEO of Hagin Investment Management, a hedge fund that focuses on mutual funds and some private equity, tells Advanced Trading. "But I don't think anybody just blindly trusts algos."

[How Are Algos Tested?]

Knight Capital has been mum about what exactly happened with its rogue algorithm; its website reads: "This issue was related to Knight's installation of trading software and resulted in Knight sending numerous erroneous orders in NYSE-listed securities into the market. This software has been removed from the company's systems." But according to reports, the firm failed to test its algorithm in its rush to beat its competitors to market and be the first to take advantage of the NYSE's new liquidity rebate program. One expert interviewed by AT who whould only speak anonymously speculated that Knight's engineers may have failed to remove "dormant code" within the algorithm used for testing before it made its debut.

While a lack of thorough testing may sound like a painfully obvious oversight, many buy-side traders rely on the reputations of the algo providers when choosing the next hot trading formula. After the Knight fiasco, however, "How do you trust it?" asks a buy- and sell-side trading veteran who spoke on the condition of anonymity. In order to use an outside firm's algorithm, he says, you have to trust the firm. "You really don't have a choice in whether you're going to trust the algorithm or not," he adds. "People are betting on the solidity of the company and their efforts to create an efficient trading algorithm."

According to Dan Nachtman, director of global execution services at Bank of America Merrill Lynch, buy-side traders should consult with their broker-dealers on the procedures and governance processes supporting algo development, testing and rollout. "While algo testing procedures should be well established, it would behoove the buy side to inquire into what level of review was performed in the wake of the Knight trading loss," he writes in an email to Advanced Trading. "Lastly, the buy side should ask about the algos utilized by the broker-dealers' internal desks and what role these desks play in the development and rollout of new algorithms."

When a new algorithm is made available by a sell-side firm or a broker-dealer, the buy-side traders Advanced Trading spoke with seem like small children standing along the edge of a pool: no one wants to be the first one in the water.

"When I use a new algorithm, I won't touch it for the first six months until they work out all the bugs," says our anonymous veteran of both the buy and sell sides. "Even on the sell side, when you are offered an algo, you shouldn't touch it until all the bugs are worked out."

Michael Levas, founder and senior managing principal of the Fort Lauderdale, Fla.-based hedge fund Olympian Capital Management, couldn't agree more. "I'd rather be the twelfth person" to use a new algorithm rather than the first, he says. "The algos I have access to have been tested time and time again, and they come from the most reputable firms, so I know that they work and other people have used them an incredible amount and at an incredible pace. I would rather be in situations like that."

In fact, many hedge fund managers test third-party algos themselves instead of just taking the other firm's assurances. "Traders should constantly take steps to ensure [that algos are tested] and have contingency plans in place -- automated and otherwise -- that will activate upon violation of strict predetermined parameters in order to stem any anomaly to minimize, as much as possible, potential damage," says Michael E. Kurzrok, director of equities for market research firm Woodbine Associates.

Algorithms are not hard to test, Hagin Investment Management's Morris says with a laugh, acknowleding the challenges of testing complex algos even as he insists his firm does its due diligience. "They are easy to test because there is a lot of intellectual horsepower on Wall Street," Morris explains. "But things don't get really fun until you put hundreds of thousands of dollars to work. From our perspective, we always have had a diligent approach of watching [over any new algorithms, but that process still] is 10,000 times slower than what you need to watch an algo."

Phil Albinus is the former editor-in-chief of Advanced Trading. He has nearly two decades of journalism experience and has been covering financial technology and regulation for nine years. Before joining Advanced Trading, he served as editor of Waters, a monthly trade journal ... View Full Bio