I have a confession to make which should be no surprise to those who knew me from my analyst days. I was not a fan of cloud for capital markets. I figured clouds in this context were like popcorn for a toddler -- empty calories and dangerous enough to avoid. Like all technology advances, cloud offerings are improving and ideas evolving all of the time. Many thought Spread Networks had a hold of the market on Chicago to New York, and then microwave relay changed the entire competitive landscape. Cloud computing is one such example of technology that is rapidly advancing at a time where the industry is in dire need for ways to better manage cost. Adoption is climbing and interest is significant.

NASDAQ OMX conducted a survey of 44 capital markets firms and technology providers in February 2013, to determine cloud adoption rates, activity and existing concerns inhibiting adoption. We asserted no bias and I conducted the research the same way I did as an analyst, begging you all for 10 minutes of your day. 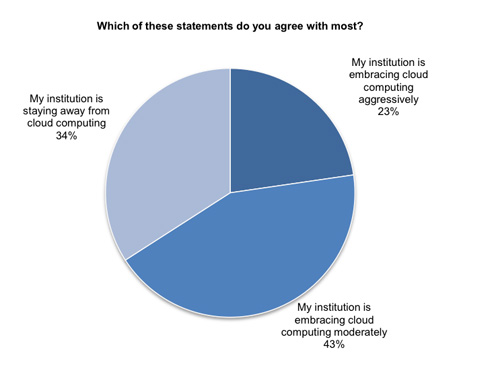 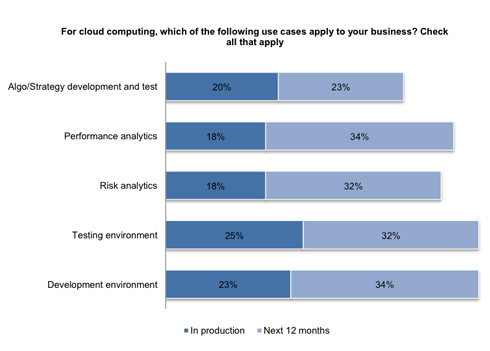 Of firms that are leveraging the cloud, application development and testing are the predominant use cases, and developing trading strategies ranks third for existing users. Many of the firms we work with indicate that they are using the cloud to both store time series data and run trading scenarios. The irony of this cloud application is that every firm is storing their own version of time series data, and while this data may be cheaper to store in a cloud than internally, it is certainly not cheaper than if firms had some form of shared cloud data. Until we get to a shared data model, the true power of cloud compute and storage cannot be realized for this application.

As shown from the survey, hosting and computing risk and performance analytics ranked lowest but represent a significant future opportunity for cloud adoption. The reason behind lower adoption rates for these particular use cases centers on confidence levels related to cloud security. Many firms are still uncomfortable using the cloud for operations that involve client data because they do not understand how cloud security has evolved.

Adam Honoré is a CEO at MarketsTech, LLC. Prior to joining MarketsTech, Mr. Honoré was the managing director at NASDAQ OMX responsible for global business development and the ISV program for FinQloud, and research director of the institutional securities ... View Full Bio