Electronic corporate bond markets are suddenly all the rage. Goldman Sachs has launched one. Black Rock has announced one. And now a large group of major Wall Street buy-side and sell-side firms are discussing yet another. Apparently, much of Wall Street now believes that a new, centralized electronic market will be required in coming years to prevent a contraction in liquidity in the $8.1 trillion market for corporate bonds.

Why the sudden interest? There's a perfect storm of looming regulatory changes that will increase the capital banks need to support their trading operations, while limiting their ability to trade for their own account.

It is nice to see the bond side of Wall Street finally get religion nearly two decades after electronic markets revolutionized equities trading. But the notion that a new centralized market will be required in coming years ignores two important facts: First, liquid electronic markets already exist for smaller corporate bond deals -- so-called "odd-lot" trades from retail investors. Second, large institutions are now testing the waters quite successfully in these markets, suggesting that odd-lot markets are not so limited in scope as their name might imply.

Ironically, electronic odd-lot markets are thriving despite a substantial reduction in the liquidity provided by bank-owned dealers since the 2008 financial crisis -- the very type of concern that has prompted talk of an industrywide initiative. The largest odd-lot market, The BondDesk ATS operated by BondDesk Trading, serves a community of more than 100,000 financial advisors and their customers, and since 2008 has seen a significant increase in liquidity. As can be seen from the charts below, the number of broker-dealers actively participating in the market has increased by approximately 60 percent to 119 as of mid-June 2012; the number of unique bonds being offered has nearly doubled to more than 15,000 a day; and the average number of daily live quotes has nearly quadrupled to roughly 76,000. While large bank-owned dealers as a group have reduced their capital commitments since the financial crisis, fresh offerings from new small-to-mid sized players have more than made up the difference. 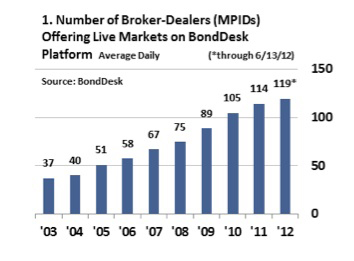 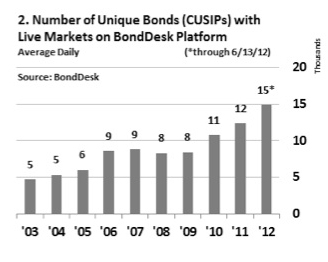 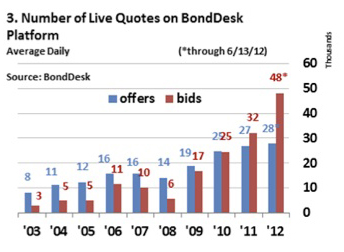 Large institutions are taking notice. A number of pension and mutual funds have found that big orders for corporate bonds can be executed quite efficiently in an odd-lot market when split into numerous small orders that can then interact with orders from the retail public. Further, for very large trades the infrastructure may not be optimized as of yet, these institutions have already begun to participate in the odd-lot market and their involvement is expected to increase as the coming new regulations take effect.

For those who have been around the financial markets for some time, the idea of a central electronic marketplace for corporate bonds is reminiscent of the calls during the early part of the last decade for a central limit order book for equities trading. The concern at the time was that investors were being harmed by having multiple independent stock exchanges trading identical listings at different prices, which today sounds eerily similar to free market competition. Rules were proposed, hearings were held, but in the end it was judged that creating a single central market would do more harm than good by stifling innovation. While it is nice to theorize about the evils of market fragmentation, the behavior of actual market participants, who have consistently chosen to utilize multiple venues, is very telling.

There is also the matter of execution. Industry-wide initiatives do have merit, assuming that for-profit, customer-focused governance trumps ego and politics. That said, many tend to suffer from the same over-engineering and bureaucratization that plagues government-run enterprises, and the Street is littered with their corpses. Meanwhile, markets largely left to themselves, guided by pragmatic, investor-focused, principle-based regulation, tend to be self-adjusting mechanisms where vacuums are filled in the natural course of events and structures evolve with the needs of participants.

Finally, it is important to bear in mind that there are as many differences between equities and fixed income trading as there are similarities, and this too will impact how the electronic market will evolve. And while the conventional wisdom may be that bond market liquidity is about to dry up on Wall Street, to date at least the facts clearly demonstrate the opposite, at least in the corner of the trading world that services Main Street investors who want to buy real bonds.

Even as the largest institutions and brokers on Wall Street contemplate a new central marketplace for bonds, don't be surprised if the odd-lot market provides them with the needed shelter from the coming liquidity storm.