50%
Tweet
Many financial reporters spoke about the market's vulnerability in the wake of the Associated Press Twitter hack, but the real story should have been the market's resiliency, as benchmarks returned right to where they were before the rogue report hit.

There have been many obstacles put in the path of the Bulls over the past two months, and even when it appears that momentum has been lost, perseverance and determine have emerged to save the day, or at least the month. Several benchmarks set new highs once again last month even in the wake of evidence that economic growth has been slowing. The “Sell in May and Go Away” crowd have been beating their collective drum, but will the Bulls hear the sound and feel the rhythm and become submissive or will they fight the negative pressures. What appeared to be the start of a correction on April 12th was a minor blip in the positive trend for US equities. The S&P 500 Index (SPX—1,597.59) ended the month at a new all-time high, rising 1.8% in April. A 1.1% gain was recorded by the Dow Jones Industrial Average (DJIA—14,734.47), but DJIA was below the all-time high of 14,887.51 set April 11th. A new 12-year high was set by the Nasdaq Composite Index (COMPQ—3,328.79), which jumped 1.9%, and by the Nasdaq 100 Index (NDX—2,887.44), which spiked 2.4%. The broad Russell 2000 Index (RUT—947.46) was down 0.1% due to weakness from small-cap shares.

As we have noted in previous reports, the Dow Jones Transportation Average (DJTA—6,177.95) has been a leader. However last month the average fell 1.2%, raising concerns about near-term market strength. Conversely, the Dow Jones Utility Average (DJUA—537.32) surged 5.7%, which continues to show a turn toward a more defensive pos-ture by investors. The Dow Jones World Stock Index (DJWS—283.55) spiked 2.6% higher but China’s Shanghai Composite Index ($SSEC—2,177.91) sank 2.5% in April and the index has dropped 4.0% year-to-date. China’s economic growth has been slowing, and some analysts are concerned that the impact on other economies will result in slower world-wide growth.

Gold prices began to sink in mid-March, and that trend continued into mid-April, culminating with a 13.3% two-day plunge that ended on April 15th, with the precious metal falling to its lowest level in more than two years. Gold (GC/M3—$1476.00) ended April above the lows, but with a loss of 7.6%. Concerns that Cyprus would sell part of their gold holdings to pay down some of their debt, and slowing economic growth contributed to the decline. Meanwhile silver, which has led gold, dropped 14.4% month/month. 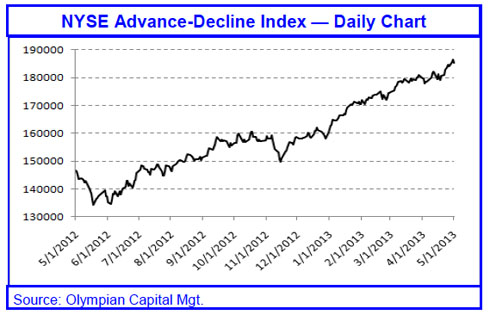 Energy prices had a similar experience last month. The Crude Oil Futures Continuation (CL/A—$93.13) dropped 4.2% in April. A “triple-top” formation was completed on April 1st at $97.80, and the commodity dropped to a low of $85.90 on April 18th before bouncing. Brent Crude (CO/A—$102.37) lost 7.0%, but ended above the lows for the month. Consumers benefited, with the average price of a gallon of unleaded regular falling nearly $0.09.

Agriculture prices were mixed. Lean hogs were up, setting a new 9-month high. Corn was vola-tile, spiking both higher and lower. Oats rose sharply and then collapsed the last day of the month. Wheat was higher and cocoa climbed to a 5-month high.

If you remember, last month we wrote that the US Dollar Index (DXY—81.78) had climbed to an 8-month high. This month the index was lower, after forming and failing at a “triple-top” on the weekly chart near 83.50, setting a lower high at 83.33 on April 24th. The Euro has strengthened over the past month but that has been outperformed by the British Pound.

A loss was recorded by the Australian Dollar vs. the US version. The Japanese Yen also dropped but has been forming a “double-bottom.”

Despite the US dollars weakness last month interest rates continued to contract. The CBOE 10-year T-note Yield (TNX—16.75) dropped from 18.52, which indicates that interest rates eased 1.77%. Once again, investors have become defensive, which has resulted in increased buying of US debt. Michael J. Levas has been in the investment management business for over 25 years and is the founder, senior managing principal & chief investment officer at the Olympian Group of Investment Management Companies. Prior to Olympian, he was a VP and Portfolio Manager in the ... View Full Bio