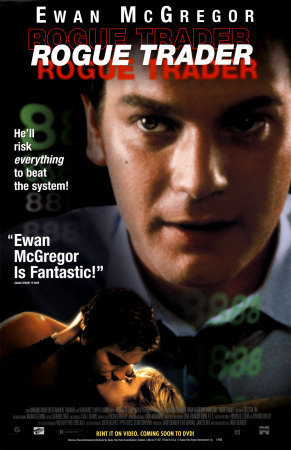 Staring Ewan McGregor as Nick Leeson and Anna Friel as Lisa Leeson. Directed by James Dearden. Rotten Tomatoes' Tomatometer gives the film a 33% and an average user rating of 54%.

Rogue Trader is based on the story of Nick Leeson, an ambitious investment broker who, in 1995, singlehandedly bankrupted Barings Bank, one of the oldest and most important banks in Britain.

A lesson in back office compliance: Without a back office team monitoring the accounts and catching unauthorized trades, Leeson did what he could to cover up mistakes and gambled on the markets with the banks funds until his scheme collapsed in 1995. He was imprisoned for six and a half years in Singapore for his crime.

Nick Leeson: [voiceover] Despite rumours of secret bank accounts and hidden millions, I did not profit personally from my unlawful trading. To be absolutely honest, sometimes I wish I had.