50%
Tweet
Where will the next generation of quantitative engineers come from? According to Wall Street pros, these are the elite quant programs. 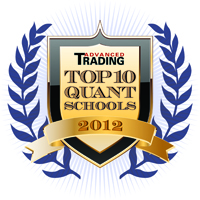 A lot has happened in the capital markets since 2008, when Advanced Trading first published its ranking of quant schools. Bear Stearns and Lehman Brothers imploded, Merrill Lynch is now the wealth management arm of Bank of America, and a raft of new regulations, including Dodd-Frank, has changed the way businesses operate.

But one thing hasn't changed: the need for quantitative analysts. In fact, if anything, the demand for quants has intensified. While Wall Street has seen wave after wave of layoffs since the financial crisis -- some counts point to more than 200,000 lost jobs -- quants have remained a hot commodity. As one mathematics professor told us, quants are smart, and smart people don't get laid off.

So where will the next generation of elite Wall Street quants come from? Advanced Trading assembled a group of five top Wall Street pros with extensive experience on the trading desk, in senior management or in hiring quants to help identify the top quant programs in the U.S. Our panel consisted of Scott R. Burrill, partner and managing director at Rosenblatt Securities; David Leinweber, algorithmic trading pioneer and author of "Nerds on Wall Street"; Michael Levas, principal of Olympian Capital Management; Unson Allen, global head of recruiting at Knight Capital; and Lou Ricci, a quant headhunter for the Hagan-Ricci Group.

Interestingly, Harvard University received several votes from our judges even though the university does not offer a quantitative or financial engineering program per se. While Harvard has a highly respected engineering and applied sciences department that would lay a solid foundation for an advanced degree in quantitative finance, we moved Team Crimson to the Honorable Mentions list. (For additional Honorable Mention programs, see page 22.) For the top 10 quant programs, we limited selectees to schools that offered a master's degree.

While these programs offer varied paths to enlightenment, our panel agrees that they do the best job of preparing candidates for quant jobs on the Street (and they all help graduates land those jobs). What follows is a brief description of each program, culled from our panel of experts as well as from the schools' own websites. But if you think we missed a worthy program, we want to hear from you before we update the list for 2013. After all, the best gauge of a quant program isn't students' success in the classroom -- it's how well graduates apply that education to the search for alpha.