Yesterday, the trading floor at ICAP, a voice and electronic inter-dealer broker, looked more like a Hollywood film set than an brokerage operation. That’s because ICAP hosted its 16th annual Global Charity Day there from 9:00-5:00, where it raised $16.3 million throughout its global offices. All of ICAP’s brokers participate in offices around the world by giving up their commissions for the day and donating them to over 100 charities, says an ICAP spokesman. 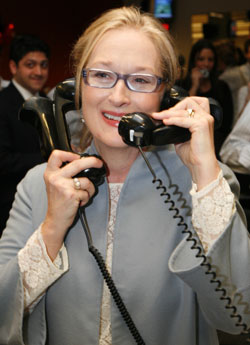 Actress Meryl Streep on the phones helping to raise money on the trading floor during ICAP´s 16th annual global Charity Day on December 10, 2008.

ICAP brokers dressed in costumes in offices around the globe--London, Hong Kong, Jersey City, etc.–to make the day a fun event while they raised money for some serious causes.

Check out the PHOTO GALLERY to see stars like Matt Dillon and Julianne Moore trading. Since the inception of Charity Day in 1993, ICAP has raised over $84 million.