50%
Tweet
As the economy continues to strengthen, the markets should be in decent shape for the remainder of the year.

Last month we wrote how many investors and traders were looking for a 10% correction and were disappointed when they did not get their wish. We also stated that the US stock market likely had some further upside. Well not only did prices bounce, from what turned out to be a short-lived untraditional correction, but they pushed higher, with many indexes and averages setting new all-time highs.

As the month of July ended, the S&P 500 Index (SPX), the most widely watched market bench-mark by professionals, rose 5% and the Dow Jones Industrial Average (DJIA), the most well-known benchmark, gained 4%. The Russell 2000 Index (RUT), which is the broadest measure of small-cap companies jumped 7%.

All three of these indices have two things in common:
1. they all set new all-time highs
2. the all bounced off untraditional corrections.

A correction is typically defined as a down-side move of between 10% and 20% from the highs. However, this bull market has had quiet a few non-traditional corrections, of between 5% and 10%.

Fueling the advance were several factors. The credit markets remain strong, with a record-setting July, which has enabled further share repurchases, dividend increases, and mergers. Companies have also generally been reporting better-than-expected earnings for the second quarter. Additionally, some weakness in the treasury markets have left investors with little choice of where they can put their money while still making money.

Many of the commodities that fell and bounced in June continued to rise from their lows. In the metals space gold and silver have recovered some of the losses, but they remain in negative trends. In fact, gold rose to test the trend resistance line and then reversed. Silver had only a slight bounce, and has been underperforming its more popular cousin, which might be a negative divergence...especially since silver has been leading gold for quiet some time.

Energy prices have been strong recently. West Texas Intermediate Crude Oil has pushed above the $100 threshold and moved to $106/barrel. This is partly due to a decline in inventories and some seasonal factors. Nevertheless, prices at the pump have been rising, with unleaded regular reaching above the $4/gallon level in several areas across the country.

On a relative basis, the US Dollar has weakened from its recent highs, but is holding stable. The Euro has gained as interest rates their appear to be heading higher. Also on the rise has been the British Pound, which has been gaining against the "Greenback."

Also rising has been the Japanese Yen and Swiss Franc. We believe this might be a shift in money as some people repatriate funds after switch-ing in a move toward safety. The strength in the US Dollar in May and June resulted in a drop in the US Trade Deficit.

There are two concerns people have with the Federal Open Market Committee (FOMC). First is when the Fed will begin to taper. The second is who will be the next chairperson of the FOMC. Meanwhile, the Fed has said that they are targeting a 6-1/2% unemployment rate and they plan to remain in a stimulating mode until that happens.

The US economy continues to grow, albeit at a slower rate than desired. The initial reading of the Gross Domestic Product (GDP) shows that the economy grew at a 1.7% annual rate, above the 1.0% consensus rate of economists.

According to the Bureau of Labor Statistics, there were 162,000 new jobs created in July. This was lower than recent levels, but still positive, with nearly all of the growth coming from the private sector. We note that many new jobs are part-time and that average hourly earnings were slightly lower. Inflation remains under control. The Producer Price Index rose 0.8% and the Consumer Price Index was up 0.5%. When removing energy and food, the respective core rates were up 0.1% and 1.6%.

Further evidence that the economy is growing came from the Durable Goods Orders Report, which surged 4.2% in June, largely the result of transportation related orders (see chart below). 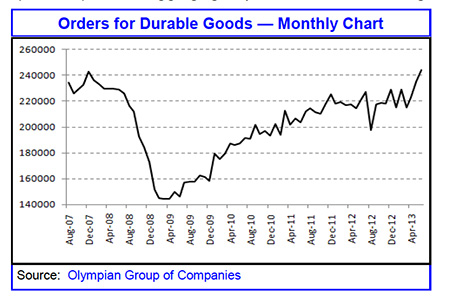 Many of the market internal indicators that we monitor are moving toward their previous high levels before the untraditional correction. This shows that the recovery took a little time to convince would-be buyers that it was real, but shows that it is broad-based.While it did not rise to a new all-time high last month, the Dow Jones Transportation Average (DJTA) recovered most of the loss and began August with a surge to a new all-time high.

Investor and trader sentiment remains relatively complacent. The CBOE S&P 500 Implied Volatility Index (VIX), which is a measurement of investor and trader nervousness and fear, dropped to a 3-1/2 month low last week.

Investors and traders remain relatively confident that the markets will continue to rise this year. However, while many companies reported better-than-expected results for 2Q, CEOs and CFOs were more cautious in their statements about expectations for the second half of 2013 and first half of 2014.

We have highlighted the strength of the automotive industry in past letters. Auto sales remain strong. Ford cancelled its yearly plant closings and even added a third shift at its Kansas City plant. The company plans to hire 900 more workers. Several automotive parts manufacturers have also been reporting stronger earnings.

On the cautious side, many traders and short-sellers were not happy with the "untraditional correction," and would like to see a drop of 10% or more for the major averages and indices.

As the month of August progresses, if history is any indicator, volume and activity will likely slow. The seasonally weak three-month period has begun, which may keep prices from advancing stronger, or may increase volatility in the market. While we are positive on the market, we are maintaining a defensive posture and utilizing strategies that minimize risk exposure. One of the key goals is to preserve capital.

While we are defensive, we continue to search out new opportunities. With the credit market in positive mode, we believe that stock prices should continue to rise for the remainder of the year. However, since there are no guarantees, we will use caution in our trading and investments.