In an age when most developers measure user experience (UX) against iPhones, iPads and other consumer-focused products, business applications often seem old and stodgy. Bloomberg LP, the market data powerhouse, has been quietly focusing on UX for three years and has built a high-tech usability lab to gather user data, test and validate new functionality. Wall Street & Technology took an exclusive tour of the Usability Lab last week

The result of some of the testing is Bloomberg NEXT, which is being announced today. Bloomberg NEXT is "a major evolution of the Bloomberg Professional service [the Terminal] that consolidates and integrates data, news and analytics," according to Bloomberg.

"Bloomberg NEXT has a lot to do with user experience," said Shawn Edwards, chief technology officer for Bloomberg LP during an exclusive tour of the Bloomberg Usability Lab with Wall Street & Technology. "NEXT is a redesign of core Bloomberg functionality." According to Edwards, the three primary focuses of NEXT are to streamline workflows for users, make it easier to discover functionality and to get answers to users faster than ever before.

Many of the new features, Edwards explains, were developed and tested with actual Bloomberg users in the UX Lab and with many users in the field. The close to 20-person user experience team has experts with computer science, data discoverability and computer/human interaction. The relatively new UX team works with 3,000 professionals in Bloomberg Research & Development, clients and Bloomberg's sales force to incorporate feedback and ideas into Bloomberg's product. 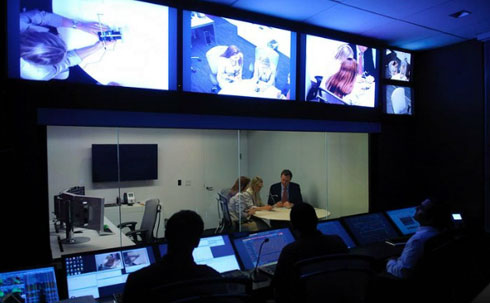 Members of the Bloomberg design team can view users through one-way glass to monitor reactions and log user’s keystrokes for analysis.

Prior to building the Bloomberg UX Lab a year ago, Edwards says members of the UX team would meet with clients either at their offices or at a Bloomberg office to gather data and feedback. The UX group was established four years ago.

The lab complete with multiple cameras and eye tracking software that record a user's session, help developers test features in a controlled space. All of the data is recorded and can be compared against other user sessions.

"You would think that you would need thousands of sessions to test functionality," Edwards says. "But in reality, 8 to 15 sessions will give you a fairly good idea of what works and what doesn't." For instance if many users pause, or get stuck, at the same point as they are going through a session, the developers quickly realize that something needs to be changed, Edwards adds.

"The complexity and interconnectedness of the global financial marketplace has grown significantly," said Tom Secunda, Bloomberg LP's co-founder, vice chairman and head of the company's financial products and services division, in a press statement. "Business and financial professionals need to synthesize astounding amounts of information to make intelligent investment decisions. We have redesigned the terminal to ensure that our clients get the best, fastest and most insightful answers."

[To hear more from Bloomberg Co-Founder Tom Secunda and how Bloomberg LP develops technology, read Inside the Bloomberg Machine.]

Lars Hansen, Senior Portfolio Manager, Denmark's DIP, the Danish Pension Fund for Engineers, said in a statement, "Bloomberg NEXT is a major step forward. NEXT is much more intuitive -- you can see multiple pieces of information on one screen, which lets you see new interrelationships."

Bloomberg NEXT is the result of a multi-year design process conducted by Bloomberg Research & Development. In addition, a select group of clients volunteered to allow Bloomberg to review keystrokes and commands most commonly used across an array of functions. Many clients also spent time in the Usability Lab. The goal was to continue to facilitate user-productivity while making navigation more intuitive and enhance the customer experience.

Some of the enhancements, according the Bloomberg, include:

* Better discoverability -- With Bloomberg NEXT, it's easier than ever for users to tap into Bloomberg's resources. Bloomberg NEXT's discoverability features allow users to get quick, direct answers to their queries as well as pull together a wide variety of related details such as companies, research and charts. A more powerful search engine means users can type just a few words and go directly to the desired securities, functions, people and news. The streamlined menu listing puts the most relevant information and topics right up front.

* More uniformity -- Every screen of the Bloomberg Professional service has been redesigned to provide a common look and feel. This consistent interface across asset classes and functions allows expert users and generalists alike to more efficiently navigate often-used functions as well as discover new functions.

* Intuitive Workflow -- The functionality of the Bloomberg Professional service has been re-engineered so that a user can quickly and seamlessly navigate through the series of questions and answers essential to making smart market decisions. The new workflow in Bloomberg NEXT allows expert users to drill deeper and occasional users to discover new functions.

"The pace of change in financial markets will only accelerate and with it the need for more information," Secunda said. "With NEXT, Bloomberg is now positioned to quickly answer those evolving questions and ensure that our clients will always have the leading edge in making investment decisions." Greg MacSweeney is editorial director of InformationWeek Financial Services, whose brands include Wall Street & Technology, Bank Systems & Technology, Advanced Trading, and Insurance & Technology. View Full Bio