It's no secret that mobile users are doing more with their devices each day, but the behavioral patterns are shifting more rapidly than ever before.

In fact, the behaviors are changing so quickly that mobile devices are becoming the platform of choice not only for users, but also for some financial providers, according to Trevor Young, senior director of product management at OANDA, a foreign exchange broker and developer of online and mobile trading platforms. "I've been in the mobile space for 12 years, and I've never seen such a dramatic shift in the behavior of mobile users as I've seen in the past two years," Young said at a press conference in New York where Toronto-based OANDA announced an updated version of its fxTrade mobile app for iPhone, iPad and Android devices. Previously, "people always had a mindset that mobile was a subset of the desktop that provided a lesser experience. But now users expect the mobile functionality to have a full experience," with all of the functionality of a desktop version.

In response, companies are developing apps for mobile devices first and then following up with updates to desktop applications later, Young says. "Today, users aren't requesting new mobile functionality, they are demanding it," he says. And OANDA is seeing increased uptake in their mobile usage. For instance, two years ago 5-10% of OANDA's users were accessing their mobile platform on a daily basis and only 2-3% of overall trading volume came through the mobile app. Today, approximately one-third of users use the mobile app daily and 15% of trading volume now comes through the mobile platform, Young claims.

OANDA’s fxTrade mobile app allows users to trade, monitor forex market activity as well as manage positions, control risk, and monitor account status and profitability while on the go. The app’s design makes the most of native iOS and Android capabilities to provide features that are important to traders. Young says the new platform took six months to develop and has been in beta testing for the past two months.

The fxTrade mobile app's functionality includes charting functionality that allows users to overlay various technical indicators for price-data analysis and customizable charts in intervals ranging from 5 seconds to 1 day. The app provides visibility into price action from a single screen, with continuous display of current prices even when manipulating chart parameters and a user interface that allows easier chart navigation, one-handed chart manipulation, scrolling trade history, and pinch-to-zoom capabilities, according to OANDA. One-handed chart manipulation is important, says Kevin Everets, senior mobile developer at OANDA. "Our usage data shows that many people use the mobile app during their commuting time, so it is important to be able to access functionality using just one hand," Everets says. "I have been surprised at the number of users who want to interact, manipulate charts and actively trade on a mobile device. I've seen charts with 12 indicators and with multiple open positions." 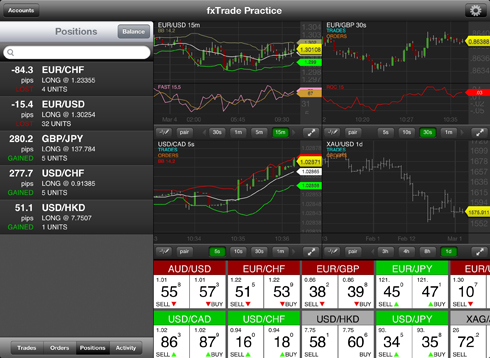 In addition, the app has streaming news feeds from Dow Jones, Thomson Reuters, 4Cast, and UBS Analysis (iPhone and Android only), and push notifications for limit orders, stop loss and take profit actions, margin notifications, and price alerts (price-alert notifications are not available on iPad).

OANDA has seen over 300,000 downloads of its app, according to Young. On mobile devices, 50% of users are on iOS with another 50% on Android. When it comes to tablets, 70% of users are on an iPad with the remainder on Android devices, Young says. Customers are also accelerating the adoption of the fxTrade mobile app on tablets, which mirrors tablet adoption in general, Young says. For instance, just two years ago 2% of the US population had a tablet. Today, 29% of individuals have a tablet, a number that continues to grow. "Some people are using an iPad as their primary platform," he says, noting that users can add push notifications on mobile devices, which is something that they can't do on a desktop. "A trader can set stop loss or take profit push notifications, which are very helpful."

“There are no longer any compromises when it comes to mobile,” said OANDA CEO K Duker in a press statement. “With this new version of our trading app, we’re providing our customers with what they want: a robust platform at their fingertips and a great trading experience, no matter where they are. We’ve seen a strong increase in downloads and use of OANDA’s native mobile app in the last 12 to 18 months, and today’s product keeps our clients at the forefront of this industry trend.” Greg MacSweeney is editorial director of InformationWeek Financial Services, whose brands include Wall Street & Technology, Bank Systems & Technology, Advanced Trading, and Insurance & Technology. View Full Bio