50%
Tweet
Thirty years after it was founded, Bloomberg LP has woven its technology into the fabric of Wall Street’s front office. Superior customer service and rapid technology upgrades have generated a loyal customer base and billions in profits. Here’s an inside look at how Bloomberg pushes out new technology at a phenomenal pace.

If it ain't broke, don't fix it. The mantra applies to many things, including cars, bicycles and kitchen appliances. It also applies to business plans.

But something has been changing at Bloomberg LP, the wildly successful market data services provider that has followed the same basic business principles -- innovation and customer service -- since it was founded.

Bloomberg LP has not-so-quietly built an empire that has woven its way into the fabric of Wall Street. But, until recently, the firm has been an inward-looking, closed-to-the-outside-world organization that relied on its own pool of talented professionals to develop tools and features for its customers. Bloomberg rarely engaged other companies (except its own clients), its executives never spoke publicly, and it didn't market itself like most of its direct competitors do, with general advertising. Instead, Bloomberg spent time developing strong relationships with clients by providing superior customer service on its primary product, which has served it so well since the company was founded: the Bloomberg Professional service, or, as it's more commonly known, the Terminal. 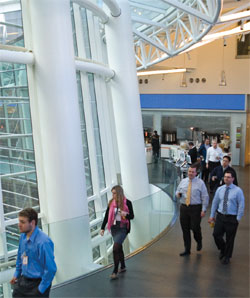 And this inward-looking strategy (with a healthy dose of paranoia) has worked. Since Bloomberg's beginnings in 1981, when Michael Bloomberg used his $10 million Salomon Brothers severance check to found the company, it has captured about one-third of the multibillion-dollar market for delivery of financial data, news and tools/applications for financial professionals. The company brings in nearly $7 billion in annual revenue, with 85 percent originating from the Bloomberg Professional terminal service. That's not to say Bloomberg relies on its original technology -- rather, the company is, pardon the expression, a machine in terms of releasing new products and generating revenue.

Today, however, Bloomberg seems to have adopted a more "open" policy. It is engaging with outside firms and talking to the press (as you can see from this article), and even has built a marketing department, which observers say didn't exist until last year.

A Culture of Healthy Paranoia

Although the Bloomberg terminal has grown and expanded drastically since it first landed on two dozen desks at Merrill Lynch (an early Bloomberg investor and first customer) in 1982, the core product remains the same: market data, news and analysis in one place, often faster than the competition. And the paranoia that drove the cofounders -- Bloomberg, Thomas Secunda, Charles Zegar and Duncan MacMillan -- to continually develop new features to stay ahead of competitors still lives on in the organization today, according to employees, who speak of this feeling of paranoia in a positive way, as a healthy motivator.

That motivation has grown the terminal, or, "the Bloomberg," into a product with approximately 30,000 functions that are used by slightly more than 300,000 subscribers, most of whom use only a small fraction of the available tools. "There's a healthy paranoia that people who work at Bloomberg seem to have that keeps them looking over their shoulder," says Domenic Maida, global business manager, Bloomberg Professional service. "It keeps their hearts beating faster when they think about solving problems and making sure that they are first to market with the solution."

People outside the firm also see the same positive culture. "There is a level of paranoia, in a good way," says Sang Lee, founder and managing partner of research and advisory firm Aite Group. "From an outsider's perspective, that is probably what drives them to innovate."

That feeling is shared among the technical staff, according to Shawn Edwards, chief technology officer for Bloomberg LP. "They're often the ones working through the night," he says. "They're the ones who are kept up coding and thinking about getting to market, and that's a huge factor of what we do -- getting our ideas out to market first and responding to our customers fast."

Noting Bloomberg's ability to rapidly deploy new products, some of its competitors have begun to offer similar responsiveness. Acknowledging that previous versions of his firm's products saw updates yearly, Harry Tempkin, head of equities in the Americas for Thomson Reuters, says the provider's new platform, Thomson Reuters Eikon, features updates at least every month. "Customers on Eikon receive new releases every month. The desktop management is very light and it is easy for us to add new capabilities," he says, adding that Eikon's hosted platform resides in the cloud, which makes it easy to send out new releases.

The "paranoia" at Bloomberg has developed into a top-down culture of innovation that helps the company improve, outsiders say. "The culture at Bloomberg fosters innovation," says Yanay Lehavi, a Bloomberg client and EVP for front office and trading applications at PIMCO, the global asset manager with $1.2 trillion in assets under management. "It starts at the top and moves down. At Bloomberg, everyone has the enthusiasm, the knowledge and the engineering acumen, and that is rare in a large company."

Although there is no single factor that allows Bloomberg to maintain such a high-quality workforce, observers point to Bloomberg's preference to hire recent college graduates, an extensive training program and an internal drive to constantly improve. "I don't think they have smarter people than everyone else," says Bob Iati, partner and global head of consulting at Tabb Group. "But their people are certainly focused on the right things."

Thomas Secunda, founding partner and global head of financial products and services at Bloomberg LP, has been with the company every step of the way. Like other Bloomberg employees interviewed for this article, Secunda prefers to talk about the product rather than himself; he demos new features on the terminal when answering questions about the company; continually talks about clients' needs; and, yes, is tightlipped about what new features are in the works for the terminal.

During a nearly two-hour interview that spans a variety of topics, it becomes evident that Secunda's drive and enthusiasm for his job have not waned after 30 years with the company. But again, he prefers to downplay the internal workings of the company and, instead, tries to steer the conversation back to clients' needs and his company's products. When discussing the Bloomberg Professional service, his eyes light up.

Pressed about how Bloomberg maintains its focus on customer service and innovation and about how it helps new hires to understand the Bloomberg way, however, and Secunda mentions the internal training programs. "Mostly, we hire new people and put them through pretty extensive training programs both on the sales side and on the programming side, so that they can learn the way to do things here," Secunda says. He notes that although Bloomberg is a global company, most of its employees are based in the United States.

At Bloomberg, CTO Edwards adds, the company views technologists differently. "A lot of technologists in this sector and this business are viewed as an expense or viewed as a cost," he asserts. "Bloomberg is different. Our technologists are making the product, so they're the heart of the company. It's a different mind-set." Greg MacSweeney is editorial director of InformationWeek Financial Services, whose brands include Wall Street & Technology, Bank Systems & Technology, Advanced Trading, and Insurance & Technology. View Full Bio