50%
Tweet
A Fidelity survey found that investors relying upon mobile finance apps are more engaged with their finances, with over 40% earning a 20%-plus return over the past 12 months.

Users of mobile finance apps are not only trading more frequently but they are earning higher returns -- at least, that’s their perception, according to a new Fidelity survey.

Sixty nine percent who trade frequently with mobile apps feel they are getting a competitive advantage over investors who do not, according to Fidelity’s Mobile Money Study, released yesterday.

In terms of results, 41% of frequent users of financial apps said they had an ROI (return on investment) of more than 20% on their total portfolios of investable assets in the past 12 months, as compared with 22% who are less frequent users. These included investments such as mutual funds, CDs, stocks, bonds, cash, savings, and other liquid assets in any retirement accounts. If a person had a $10,000 portfolio a year ago, this means he or she now has at least $12,000.

The survey -- conducted from the end of July through the middle of August -- was conducted with investment decision-makers age over 25 years of age with investable assets of more than $50,000 and who prefer to use financial apps on their smartphones or tablets at least monthly. Frequent users are those using financial apps more than once a week.

Though there is no proof of their results, and investors tend to magnify their returns when they talk about their own performance, a Fidelity spokesman says clearly investors are not making it all up.

“People who tend to use mobile tend to be much more engaged with their finances,” comments Veila Carboni, senior vice president, mobile channel, at Fidelity. “It’s always with you so it’s only on.” Carboni attributes the higher returns to people staying more engaged. The more frequently investors trade, the more engaged they are with their finances. Carboni says she would tie their ROIs to their engagement with mobile financial apps and that they are doing more monitoring and taking advantage of opportunities. In addition, Fidelity observes that people are very repetitive users within the apps.

“Once you download the app, there’s a lot more loyalty and engagement. It keeps the person more involved in their finances," Carboni tells us.  Some investors trade on mobile apps  8 to 12 times a month. “It’s extreme engagement,” she adds, noting that mobile apps bring information forward to users on the devices they carry around.

“In the past year, investors increased mobile trades at Fidelity more than 40 percent, and the survey found that more than one third of mobile traders make trade decisions on the spur of the moment, capitalizing on investing opportunities from their screen anywhere,” said Carboni in the survey release.

US mobile users access financial apps on their devices for personal finance activiites like paying bills (53%) and, most commonly, checking account balances (71%), but increasingly they are relying on their devices for investing tasks. More than half of respondents (56%) are performing sophisticated investing tasks on mobile financial apps, including technical research/charting (43%), fundamental research/reading analyst reports (44%), and trading (41%) at least once a month.

Trading in front of the TV and in the bathroom
Suggesting that a new breed of trader is emerging, Fidelity notes that more than half (53%) placed their first mobile trade in the last 12 months.

In fact, people are so engaged with their mobile devices, and these devices are so convenient, that people are taking them out of the office, with 65% of mobile users saying they use a financial app in the bedroom, 49% in the car, 35% at the dinner table, and 10% on the golf course. In fact, 39% of mobile users say they are conducting mobile finance in the bathroom. However, the most popular location for mobile users is in front of the television: 77%.

As for device usage, Fidelity notices that investors skew a little bit higher toward smartphones than the tablets. The reason is that people tend to carry their smartphones more than a tablet throughout the day. “It’s that convenience with the device that you are always engaged in managing your finances.”

Fidelity provides access to research on whichever platforms investors are utilizing, emphasizes Carboni. While research can be more robust on a tablet, there is also “great content” available on the smartphone, including news and quotes, she says.

While users are trading more frequently, Carboni says they are doing research ahead of time. They may do research on Fidelity.com via desktop computer and then set up a watch list and then initiate a trade on a mobile device. Investors are doing technical analysis, charting, and research before they trade. But the biggest gain of activity has been on smartphones, since they contain the most relevant things that people want to do, coupled with capabilities on the device.

The Most Popular Locations for Using Mobile Financial Apps 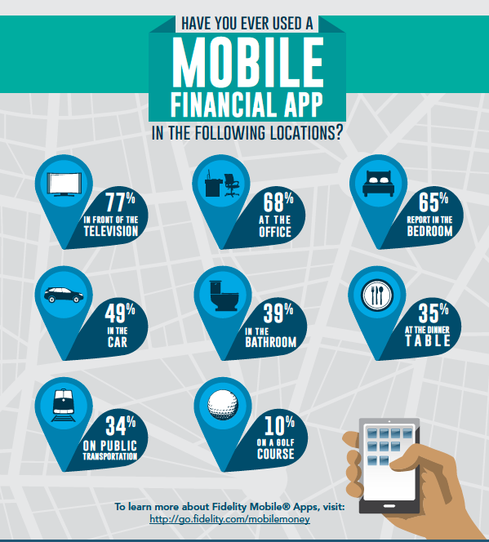 US mobile financial app users are managing their personal finance activities in various places, including the bedroom, the car, in front of the TV, and even in the bathroom.

Fidelity refreshes mobile apps
Now that investors are relying more on mobile apps for managing their money and investments, Fidelity is rolling out new versions of its mobile brokerage apps and NetBenefits app for the iPhone, iPad, and Android. Starting in November, brokerage apps for these devices will be updated with new features, including multi-leg option trading, extended hours for trading, and margin trading in IRA accounts, among other features.

According to Carboni, multi-leg options trading has been one of the top apps requested by investors.

The trend toward mobile finance is also causing Fidelity to develop in a way that simplifies complex functions.

“You’ll have less real estate and screen space, so you are forced to get the function down from the get-go,” says Carboni, explaining how Fidelity works to simplify very complicated tasks. “The interface is more intuitive, and you’ll see a lot more use of visualization, touch capabilities, and graphics.” With something complex like multi-leg options, the mobile app will have the same 10 tasks, but it may be more visual or use touch to swipe through.

“We do the same complicated tasks, but we do it in more bite-sized tasks,” says Carboni, adding that users want “snacks as opposed to a whole meal.” So far, the approach is working. “I would say that what we’re seeing is just greater engagement across the board and people wanting to use these complementary channels.”