50%
Tweet
Some market professionals thought Apple's 3% price decline last Monday was a flash crash or an algo run wild. Quants at Rosenblatt Securities analyzed the tick data and came up with a different interpretation.

A steep drop in Apple's stock price last Monday triggered some speculation as to whether a flash crash or a fat finger was behind the move. The event happened a week ago, but there are still varying viewpoints on what precipitated the fall.

"When it's something like Apple, the biggest stock, it raises a lot of eyebrows," said Joe Saluzzi, partner in Themis Trading of Chatham, N.J., who is critical of US equity market structure and tracks incidents of mini-flash crashes occurring on a daily basis. He said $35 billion of the iPhone maker's market cap was lost in a matter of minutes, impacting retail investors. And it impacted other instruments, such as options and ETFs holding Apple.

News headlines that day fanned the speculation. For example, there was "Apple Inc. Flash Crash: What You Need to Know" in the Motley Fool. "The stock fell more than 3% just in that minute, and ultimately dropped as much as 6.4%," the Motley Fool wrote. As for possible reasons for the unusual volume, CNBC suggested that it could be profit taking after the stock's runup in the fall, or that automatic selling by program trades may be to blame. 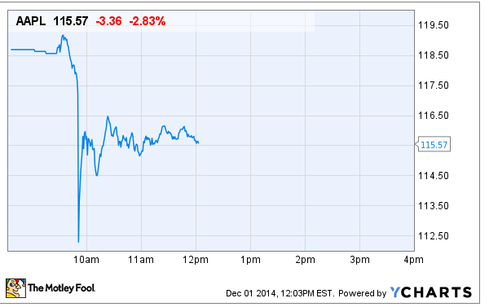 The Motley Fool reported that Apple trading volume spiked last Monday as shares took a dive of 3% in less than a minute, and ultimately fell about 6.4%.

Amid all the buzz, Scott Burrill, a CFA, partner, and managing director at Rosenblatt Securities Inc., rejects the notion that Apple's drop was a flash crash or a glitch.

Burrill, who analyzes the entire universe of stocks in real-time, attributes the high volume to a large seller. In a chart posted on Twitter and LinkedIn, he identified three large dips, each 2-4 seconds long, pointing to a large seller of Apple.

"Rather, this one looks like one or more big investors simply wanted out," tweeted Justin Schack, managing director and partner at Rosenblatt. "That's going to move the price of even a giant like $APPL." 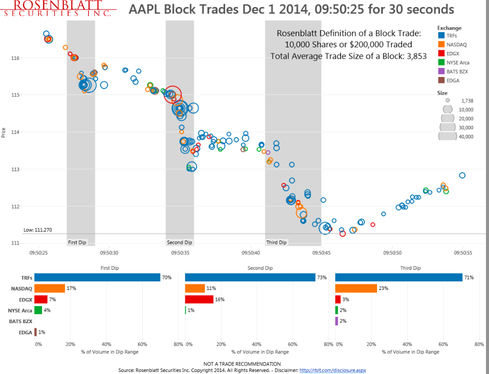 Using big data tools, Rosenblatt Securities identified three dips in Apple's share price on Dec. 1st, suggesting the price dips were due to institutional selling. Based on the firm's definition of block size, 17.6% of the volume occurred through block trades.

"If you look at the data and you understand market structure, and trading more importantly, we can see where the levels were getting hit, what was going on and when," Burrill said. He also checked to see if this was part of an equity-linked trade with derivatives. "There was nothing form a put-call perspective," he said. "Somebody pulled the trigger. Somebody wanted out of the stock."

But, for such a significant move to occur in Apple so quickly, block trading was apparently involved. Burrill's analysis uncovered that 17.6% of the volume was executed in block trades. A block is usually defined as 10,000 shares or $200,000 in value. "If we just focus on the volume size criteria of 10,000 shares, we see an average block size of 16,460 shares." Based on Rosenblatt's definition of blocks, the total average volume in Apple was 3,853 shares. The average trade size was 244 shares.

Rosenblatt's analysis also reveals that 70% of the trades were reported to the trade reporting facilities (TRFs), which suggests that most of the volume was executed in dark pools, ATSs, ECNs, and internalizers. On average, about 40% of Apple's trading does occur in dark pools anyway, Burrill said. Among the exchanges, Nasdaq handled 17% of the volume on the first dip, 11% on the second, and 23% on the third. BATS' EDGX executed 7% of the first dip, 16% of the second, and 3% of the third, according to Rosenblatt's chart.

"The bottom line is I wouldn't call this a flash crash," Burrill said. "This is somebody that wanted out of a position and other programs piled on and affected the trade. But there wasn't a nefarious trade."

There could have been selling for a number of reasons, he said. For example, this was the first day of the month after a holiday weekend. Portfolio rebalancing is another possibility -- people reliance their portfolios for a variety of reasons, and this followed the most significant move in oil prices, which could have put pressure on someone to take profits in tech names.

In addition, Burrill said, the efficiencies in this stock's market revert fairly quickly. "If you look from an ex-post-trade perspective, the stock closed within 50% of its high-low range of the day, showing that the markets were efficient and worked, and that there was underlying buying. Was it a sloppy trade? It wasn't the bet best trade, but the market prevailed." At press time, Apple's range was $111.96 to $114.64

However, Saluzzi has many questions about the Apple trades. "Where were the liquidity providers? Did they cancel their orders? Why did the stock drop right down to the limit up/limit down bands?" He feels it was an enormous amount, and prints in dark pools don’t explain anything. "No one really knows what can happen. It's really now up to the regulators to dive into the data."

He'd like to see the SEC (which has the Midas system) get involved and analyze the data quickly to put the arguments to rest. "The only people that can explain this is the regulators, and that's who we need to come in here to tell us what exactly went on."