Thousands of users of Bloomberg Professional, or the Terminal as it is commonly known, make use of the platform's instant messaging feature daily. While the chat functionality helps users complete transactions and find information from other users, it has limitations when it comes to using it for trading or negotiating deals in specific asset classes.

This is especially true in the foreign exchange (FX) space, where traders often negotiate details of a deal through instant message. To meet the growing needs of foreign exchange (FX) clients, Bloomberg has released Instant Bloomberg (IB) Dealing, a chat-based platform for FX traders. IB Dealing is already being used by more than 100 global banks for trade negotiation and execution, according to Bloomberg.

"Over the course of a day, many traders and clients negotiate deals on IB Chat," said Tod Van Name, Global Head of FX Commodities and Economics at Bloomberg, during an interview with Wall Street & Technology. "IB Dealing is for a more formalized FX world. You can negotiate trade details and parse them into a trade ticket. It is part of the way the industry has been trading for a while. It helps to automate a process that was previously done manually over the phone."

[Other banks, including Citi, might be making preparations to move off of Bloomberg chat. For more on the topic, read: Bloomberg's Chat-Based FX Trading Tool Attracts Citi, As Banks Reportedly Seek Chat Alternatives.]

Bloomberg developed IB Dealing because users may not want to negotiate a deal in Instant Bloomberg, since it may not meet compliance and reporting requirements for certain FX deals. "When they are completing a deal, the details of the trade and the conversation can be sent via STP to the back office for confirmation," Van Name said. "You might not want to have trades done on IB chat, since there are many other chat messages" that might not be relevant to an FX deal. "They will use the IB Chat for normal conversations, but when they are trying to strike a deal, it is streamlined into IB Dealing."

Citi collaborated with Bloomberg to enhance IB Dealing and their adoption of the platform generated department-wide cost savings by reducing the number of other trade communication systems used by their FX and emerging markets trading desks.

"Bloomberg's IB Dealing capabilities have significantly reduced the costs of our foreign exchange trading operations and improved our internal communication," said David O'Shea, director of emerging markets, FX and EMFX E-commerce at Citi, in a press release. "By developing a single integrated platform, Bloomberg has produced a solution that Citi will be able to rely on for years to come." 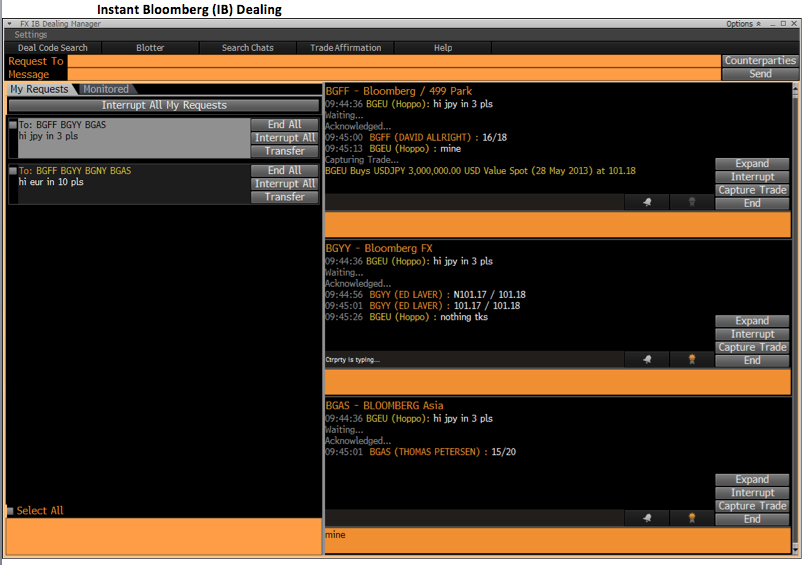 IB Dealing meets Citi's monitoring and compliance guidelines and is now used by their FX and emerging markets traders worldwide to securely send and receive trade and pricing information, internally and externally. The platform is available as part of the Bloomberg Professional service, which is also used across Citigroup's organization for data, news and analytics. IB Dealing is available at no additional cost.

Recently, Bloomberg has faced criticism because it let Bloomberg News reporters access Bloomberg Professional user information. Following the revelations of the Bloomberg Snooping Scandal, as it has come to be known, some Wall Street firms have questioned whether users should use Instant Bloomberg. According to reports, JPMorgan, Deutsche Bank and Goldman Sachs are a few of the banks that are exploring alternatives to Instant Bloomberg.

Although Van Name could not comment on what other firms are doing, he did say that IB Dealing helps FX traders connect with traders at other institutions, while an individual bank's instant messaging program might only be for connecting internal bank employees. "Not every employee at a large financial institution has a Bloomberg Terminal, nor would you expect them to," Van Name said. Banks are looking for ways to help their internal employees communicate and that is why some are looking to deploy internal chat functionality, Van Name added.

"IB Dealing -- which has been developed in collaboration with FX traders -- provides the global FX community with the capabilities they need to negotiate transactions, electronically execute and report trades using one, integrated platform," said Van Name, in a press statement. "Customer service is Bloomberg's utmost priority and our clients are increasingly looking to Bloomberg for innovative and efficient end-to-end solutions that provide exceptional value in today's challenging environment."