50%
Tweet
The move is the latest step taken by BGC Partners to grow its derivatives trading business while competition is heating up among D2D and D2C platforms.

The move is yet another sign that BGC Partners is moving swiftly to expand its business in swaps trading both organically and through acquisition. On October 22, the interdealer broker started a $675 million hostile bid for GFI Group, a rival New York brokerage and clearing firm.

Cawley was formerly CEO of the SEF Javelin Capital Markets, which he founded in 2009, where he was an early advocate for swaps trading on SEFs. He left Javelin in May of this year. 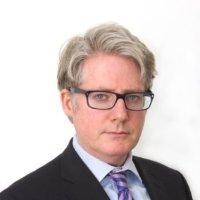 "I am happy to be in the BGC family," comments Cawley in an interview. BGC has offices around the globe and is a huge force in cash markets and derivatives markets, particularly in interest rate swaps in Europe and euro-denominated swaps located in London.

"I think my talents can be put to good use in terms of mustering the resources of BGC and deploying them the right away," says Cawley. While not commenting on the bid for a rival, he says: "We're as comfortable as building businesses from the ground up as we are as acquiring businesses."

Now with the hiring of Cawley, BGC is positioning the SEF to capture more market share and strengthen its derivatives offerings. "BGC doesn't not like to be in the back of the race, and they're now deploying resources across the board to make sure that happens," he says.

Cawley will assume responsibility for all aspects of BGC's SEF, including spearheading its growth, business development, regulatory compliance, and policy implementation, states the release. He based in New York, and reports to Philip Norton, global head of e-commerce at BGC. In addition, BGC Partners announced that Angelo Toglio, who served as interim CEO of BGC's SEF, assumes the role of chief operating officer.

"My first remit is really to build upon what we have which is a good solid base in the voice context. We have excellent relationships with the banks, but also to really look to the markets and address the customer needs," says Cawley. He notes that BGC has strong electronic DNA with eSpeed, an electronic fixed-income trading platform that was sold to Nasdaq OMX last year. "It was very entrepreneurial in building out that business," he adds.

BGC supports multiple modes of execution both in limit order book and also in RFQ for straight swaps and for various combinations of swaps, curves, butterflies vs. Treasuries. It also has an auction-match proven to be successful in Europe, he says. "As the markets electronify and become really straight through in seamless processing, they're coming at swaps with a fresh pair of eyes and renewed commitment to building it out," he says. 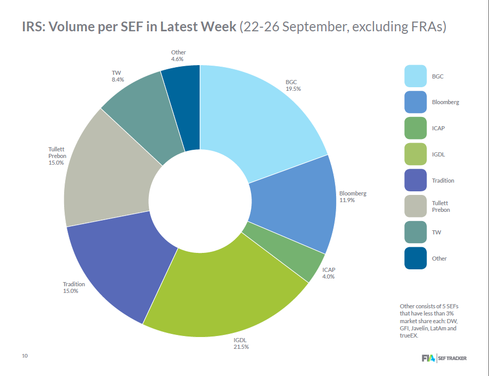 BGC Partners captured 19.5% of rates volumes, which ranked in second place after rival ICAP IDGL with 21.5%, while Tradition and Tullett Prebon each had 15%, while Bloomberg had 11.9%, Tradeweb had 8.5% while ICAP's U.S. SEF had 4%, according to FIA SEF Tracker's latest report for the week of September 22 through September 26.

Dealer-to-Dealer (D2D) SEFs, which were the first SEFs to go live, enjoyed over 95% of notional volume traded via SEF initially, but they are starting to lose ground to new client-facing D2C SEFs, states the report. The report finds that 44% of activity for USD-denominated rates is transacted through D2C platforms.

Tabb's analyst predicts that for IDB venues, competition will intensify as November 15 approaches, which is the third and final regulatory deadline in the 10-month process of SEF rule implementation.

As the last of the CFTC exemptions for package trades expire on Nov. 15, Cawley anticipates that more volumes such as strategies involving swaps and US. Treasuries will move onto SEFs.