50%
Tweet
August through October are traditionally the weakest months for trading. The markets aren't doing anything in 2013 to buck that trend.

One month ago we noted the "bounce back" from the June correction and now we find that the bears have been able reignite the correction, from higher levels. But there are some valid reasons for the increased volatility, which we will get into shortly.

August is a period of seasonal weakness and historically the beginning of the weakest three months of the seasonal trading calendar. However, sometimes it surprises us, in a pleasant way, but this year was not one of those times. The S&P 500 Index (SPX) sank 3.1% and the Dow Jones Industrial Aver-age (DJIA) dropped 4.5%. The Russell 2000 Index (RUT), one of the market leaders, was off 3.3%. Another leader, the Dow Jones Transportation Average (DJTA), eased 3.3% as well.

There are many new potholes on the highway to profits. They include the question of when the Fed will begin to taper its quantitative easing program, choice of the new Fed chief, military action against Syria for chemically attacking its own citizens, and conflicts that are being created by the Affordable Care Act (commonly referred to as Obamacare). 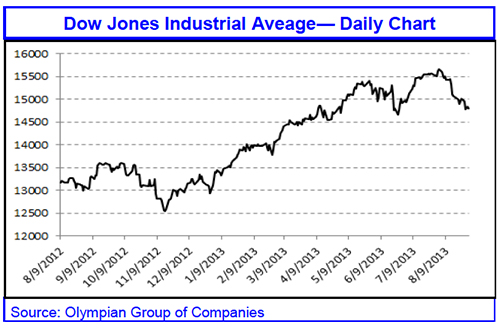 As a result of some of those "potholes," we have seen economic changes that include rising interest rates and higher energy prices. On the positive side, the European Union appears to have exited recession. While the gains are nothing spectacular, and there is a chance that expansion will not be very impressive, the change should be beneficial on a global basis.

[To learn more about improving the end-user experience, register for Interop here and check out the “Case Study: Major Online Brokerage Combines People, Process, and Technology to Improve End-User Experience” session on October 3 in NYC.]

Precious metals have risen from their recent lows. Gold and silver have bounced nearly 20%, and there has been improvement to their charts. High grade copper rose back to the June highs but has also retraced some of the advance.

Oil & gas prices have also been rising. Conflicts in Egypt and Syria combined with seasonal factors, have resulted in West Texas Intermediate Crude Oil futures rising to a 27-month high. Ahead of the Labor Day Holiday week-end gasoline prices were relatively stable. 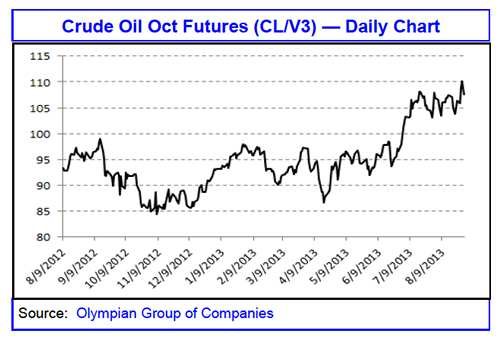 The US Dollar Index continued to decline from the July highs, setting a series of higher lows in August, that resemble what technical analysts refer to as an inverse head-and-shoulders positive reversal pattern. The index than rose to end the month as was marginally higher. Gains were made versus the Euro, Japanese Yen, Swiss Franc, Aussie Dollar, Canadian Dollar, and New Zealand Dollar. The "Greenback" was lower versus the British Pound. One currency that has really been impacted recently is India's Rupee. Recent intervention has caused the Rupee to rise but still remains below July levels.

Last month we wrote about two major factors for the Fed. According to media reports, President Obama appears to be leaning toward selecting Lawrence Summers to succeed Ben Bernanke as FOMC chairman.

Additionally, the media believes that Bernanke wants to begin tapering before he leaves office in January.

A surge in US exports resulted in a stronger-than-expected revision to Gross Domestic Product (GDP), which showed that the economy grew at a 2.5% annual rate for 2Q, up from the initial reading of 1.7%. That compared to an expected rate of 2.2%.

However, while second quarter readings were strong initial readings of third quarter economic reports are not so promising. Orders for durable goods dropped sharply in July, according to the US Department of the Census. Even when transportation items were removed, durable goods orders fell 0.6%, and after defense items orders plunged 6.7%.

Back-to-school sales are not so robust either. Recent same-store sales for August were disappointing and raising concerns about the upcoming holiday shopping season.

Last Friday the Department of Labor reported that 169,000 new jobs were created in August, below expectations. Additionally, the July reading was revised sharply lower. This indicates that job creation appears to be losing momentum, in line with our the-sis that the economy continues to expand but that the rate of growth has been slowing.

Investor confidence appears to be shaken a bit after the benchmarks set new all-time highs at the beginning of August but ended lower. The market has become more sensitive to news items, especially negative news.

There are many items that are have raised concerns. They include Obamacare, the debt limit, budget deficit, lack of a budget, Syria, Cyrus, Greece, and a host of other geo-political and geo-economical potential disasters.

Investor and trader sentiment reflected the concerns about the economy. The CBOE S&P 500 Implied Volatility Index (VIX), which is a measurement of investor and trader nervousness and fear, had risen to a three month high at the end of the month.

During the past month the markets have gotten more complicated. As we wrote last month, the use of more defensive strategies was becoming prudent. The look ahead, as we illustrated at the beginning of this commentary, is like a road that is now more bumpy.

In addition to the economic and geo-political concerns, we are now in the middle of the three weakest seasonal months of the year. September is historically the worst performing month while October is known as the scariest month of the year.

We continue to suggest the use of defensive strategies. Stock and instrument selection have become more important. After the selection process comes strategy implementation, which should reduce risk exposure and market volatility during a period that may be more volatile than the past few months.

Overall, we expect the US equities market to resume the positive trend, and believe that weakness provide opportunities to purchase shares at lower prices.