50%
Tweet
Social media has mainly been a marketing effort in financial services, and many firms are not tracking ROI. Yet, some are deriving value from analysis of social data, whether it's sentiment analysis for trading or credit risk in lending.

Even so, financial services companies are in different stages of utilizing social media. For example, New York Life has a dedicated person who manages the team that posts content every day to social media that is not necessarily about insurance, but about family-oriented issues that are relevant to Gen Y or other groups, said Todd Eyler, research director, Aite Group’s insurance practice, at the Financial Services Think Tank event. “It’s like a safety tip that might be useful to you.” On the other hand, these are early days for social media. Regulatory compliance is a big issue too. “You want to be real-time [with customers], but what can you say really quickly without being tied up with compliance issues?”

Regulations are a top barrier limiting the ability of financial institutions to communicate effectively using social media, according to 46% of survey respondents. Carlson agreed that regulations are holding firms back from using social media and that there are varying interpretations within the bank. “Some employees are blocked from social media because they are regulated.” A couple of technologies can help, such as e-discovery, cataloguing, and storing, but not one financial services organization has it all figured out yet. 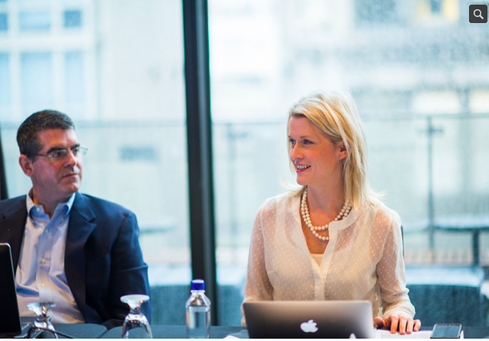 Kelli Carlson (right) of Wells Fargo explains how the bank has integrated social media across all of its business units, while Todd Eyler (left) of Aite Group discusses how insurance companies are using social data to sell more than policies to customers.

The industry needs to educate regulators -- FINRA and the SEC -- that social media can improve customer service, said Carlson. Employees also need to be educated. A 20-year-old born with a Facebook account may say, “I write restaurant reviews,” but doesn’t know how to tweet for business.

Institutional trading and asset management have been slow to adopt social media because of information leakage issues, said David Weiss, senior analyst, capital markets, Aite Group, who spoke on the panel. “The notion of firms tweeting their trading strategies is frankly nonsensical to these players.” On the flip side, institutions are consumers of social data for what’s known as sentiment analysis. Some startup technology firms and proprietary trading firms are consuming tweets on symbols to analyze market sentiment. “They are finding some correlation with what they see on public social media networks with stock movement, up or down, sort of moving ahead of the formal PR, company news reports, and filings.”

Detecting credit risk and fighting fraud
David O’Connell, Aite Group’s senior analyst for commercial banking, said there’s “an unbelievable amount of data" on social networks for banks to analyze. He knows of commercial banks that are analyzing social media data to identify credit risk on the lending side. Say a borrower that makes sneakers has reported lower quarterly revenues. “They can use sentiment analysis to figure out if this is as short-term supply issue. Maybe it has something to do with sentiment toward a company’s product, or it’s a bigger problem and it’s a valid credit issue.” The second opportunity to use social networking is for fraud deterrence. When a bank enters a vending relationship, it often involves a number of entities including the borrower, suppliers, employees, investors. Banks are tracking this data to see if through an entity, person, or device there is any connection to fraud. “I know that banks are turning up red flags.”

On the insurer side, the biggest issue is to build up “clearer relationships with policyholders," said Uddipan Bagchi. The only times that insurers interact with their customers is when a policy is sold, when the annual premium is paid, and when someone dies. “It’s not a happy relationship. Insurers are looking to use the social data to sell a broader package of services where insurance is just one element.” For example, when selling an annuity, they can talk about providing services for doctor appointments, how to take care of your medical needs, and larger social needs and bundle in insurance to sell. “This has suddenly opened up to insurers a different set of products they can bring to market.”

However, he knows of various institutions, especially retailers, that are trying to understand the customers’ needs and life events that could disintermediate insurers if they don’t move on social data, he warned. “Retail will own the customer. They will own the relationship. The financial services firm will just be another manufacturer relegated to the background, not owning anything else.”

But Aite’s Weiss cautioned firms about the “creep factor” of the insurer using social data to sell more aggressively to the consumer. “Don’t push it too far, or you run the risk of creeping out the consumer.” Weiss questioned the assumption that social media will alter the relationship with insurance agents.

Despite some of the regulatory uncertainties surrounding social media, panelists suggest the risk of not being on social media is even greater. “A totally new point is that people need to see the risk of not investing,” said Nishi Singhal, director and head, banking and capital markets practice, Dell Services. "If you don’t invest, what's the risk you actually have?”