50%
Tweet
Even as the SEC and CFTC ramp up their technology, they still lack the firepower to effectively police the capital markets.

The Securities and Exchange Commission was severely criticized for failing to seize multiple opportunities to stop Bernie Madoff before he swindled investors out of $65 billion, and the commission's reputation was further savaged by the financial crisis, when regulators were accused of being asleep at the switch. As accusations of ineptitude and failure to react to changing market forces continue to plague the SEC, it is fair to ask: Is the SEC relevant in today's increasingly fast, electronic markets? 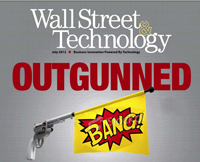 "Firms and regulators didn't know who owed how much money, who was trading in what. You never knew who valued [derivatives] or how," according to the regulator, who spoke on the condition of anonymity. "There was also the problem of how firms could disclose the valuation of their income when their holdings change every day, every minute."

For regulators, including the SEC and the Commodities Futures Trading Commission, the market's absurd lack of transparency in areas such as derivatives, which was sorely exposed during the darkest days of the financial crisis, served as a wake-up call that they urgently needed to review both how the markets worked and how oversight of market players was conducted. As the markets become increasingly fast, one of the most immediate challenges they face is how to deal more effectively with the huge amounts of data that flood the markets every day.

Recognizing the urgent need to ramp up its technology, the CFTC created a data office and, in October 2011, hired Srinivas Bangarbale, the former head of application development at the SEC, as its new chief data officer. One year earlier, the SEC appointed Tom Bayer as its CIO; he reports to Jeff Heslop, who was named the agency's first-ever chief operating officer in 2010.

Following a review of the SEC by the Boston Consulting Group, Bayer created a steering committee to guide the way the regulator implements technology across the organization. "A lot of its work is to leapfrog what we already do," Bayer tells WS&T. "We try to look at the broader picture, how the financial markets are affected by changes in technology, and also how technology can improve the way we do work."

Like other regulators, the SEC has beefed up its ability to ingest and analyze the data that floods the market on a daily basis -- and thanks to its new analytics technology, it has been able to more effectively pinpoint market abuses, Bayer reports. According to the CIO, he has been working with two Big Data experts -- Jeanne Ross from MIT and Barb Wixom from the University of Virginia -- to gain insights into emerging and evolving best practices in data analytics technology. "Their technology case studies cover a range of companies, and the information gives us a broader view of innovative practices across industries," Bayer says. "From a big data perspective, they inform us of how social media companies are analyzing their data. For example, Jeanne helped me understand the positive impact of 'gamification' on learning and business process."

Other regulators also have boosted their ability to ingest and analyze big data. According to FINRA's Colburn, the regulator has invested heavily in data warehouse appliances, which include integrated sets of servers, storage and operating systems. "Lately we have looked at Hadoop to process voluminous amounts of data and make it ready for regulatory use," he said at SIFMA.

Meanwhile, the SEC is about to deploy advanced market analytics that enable it to assess trading patterns within day-to-day market activity. The watchdog also recently developed and started using "aberrational performance analytics" for hedge funds, the SEC's Bayer notes. "It allows us to understand a particular hedge fund's performance and also the performance of the peer group that a hedge fund operates in, and that allows us to understand outliers," he explains.&nbsp;"And those outliers are then indicated as a potential risk, and that risk is then investigated through the Office of Compliance Inspections and Examinations, OCIE, and also the Enforcement Division. They do further analytics on the performance, and that way we're able to find people who are outliers. And we have done that several times in the last year."

To more effectively analyze the data that comes in, and to better present the SEC's cases to prosecutors, Bayer says, he also has begun to implement data visualization technologies at the commission. As such, the regulator now has the ability to intake phone records and other data that previously would have been handled by an individual who would have had to manually review phone records over a 10 or 12 month period, according to Bayer. Now, "Within minutes we're able to analyze phone record data to understand links between various parties, and also to display those links visually to a jury and a prosecutor, which is very powerful," Bayer relates. "We can crunch a lot of data and produce an output that is visual in nature and allows a jury or prosecutor to understand if there's a linkage between a particular phone number at a party's location and who they have been calling and what the links are to insider trading and other matters under investigation."