50%
Tweet
Following a strong January, February was not as enthusiastic for the markets. Plus, it seems as if investors are embracing sequestration, but is that a good thing?

Unlike January's events and performance the markets were not as enthusiastic in February. Confidence was shaken by the elections in Italy, an effective drop in personal income and expectations of potential weakness connected to automatic government spending cuts.

Following a very strong, unsustainable start to the new year, investors and traders had a realization that while the intermediate and long-term outlooks are attractive, there are many short-term hurdles that need to be jumped. From the pressures in the Eurozone to the political stalemate in Washington, there are concerns that are creating potholes in various roadways. Consumers, businesses, governments and even non-profits are being -- or have the potential for being -- impacted. That has removed some of the optimism that was evident.

Once again, the most outstanding performance came from the Dow Jones Transportation Average (DJTA -- 5,993.35) jumped 3.3%, setting more new all-time highs while outperforming other benchmarks. As we mentioned last month, should DJIA also set a new all-time high, which was less than 50-points away last Thursday, a new Dow Theory Buy Signal would be issued, a positive signal for stocks.

Futures on West Texas Intermediate Crude Oil (CL/H3 -- $91.02) registered their first monthly loss in four months. After reaching a peak of $3.17/gallon March gasoline futures (RB/H3) dropped to end the month at $2.88/gallon. The problem is that consumers are not benefiting from those declines thus far.

Despite all of the uncertainty, both politically and economically, demand for precious metals has dropped. The spot price for gold was $1,579.80 an ounce at the close of the month, down 5.1% for February. Silver prices plunged 9.3% to the lowest level in six months.

Commercial metals were also lower. While the housing and home building businesses are showing signs of expansion, High Grade Copper (HG/H3 -- $3.56) fell 4.8% for the month, ending just above its lows.

US Dollar and Interest Rates
Even as the parties in Washington continue to struggle with each other, and sequestration becomes the law of the land, the US Dollar is being favored (see chart below), especially versus the Euro, which has been under pressure. Political events, such as the election in Italy and the upcoming voting in Germany is being complicated by very high unemployment and social constraints being impacted by high debt. Austerity vs. something else. 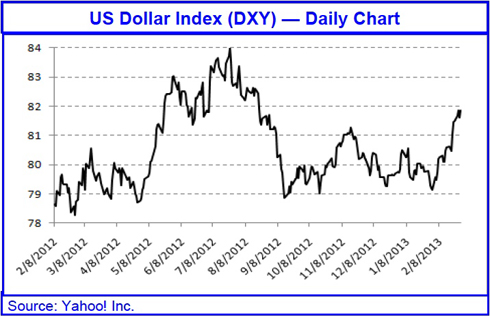 So, even as the US debt level grows, and economic growth becomes threatened, the US Dollar moves higher and money is going into US treasuries. The US Dollar Index climbed 4% from February 1 to March 1. For the past two months the greenback has been outperforming versus the Euro, British Pound, Canadian Dollar, Swiss Franc, Australian Dollar and Japanese Yen, among others. As a result, interest rates have been declining.


The first revision of 4Q Gross Domestic Product (GDP) lifted the reading from the negative to the positive. However, the next revision and subsequent quarterly reasons could come under pressure as the government shut downs occur.

A rise in income tax withholding is also threatening economic growth. Personal income dropped $505.5 billion or 3.6% while disposable personal in-come plunged $491.4 billion or 4.0%. Memos released by Wal-Mart Stores (WMT) illustrated the impact that the higher taxes are having on lower and middle income families.

Equities, A Deeper View
In general, the markets appear to be embarrassing the idea of sequester. Most of the major averages and indices have been rising, discounting negative news headlines. As the chart below shows, the percentage on New York Stock Exchange stocks trading above their long-term 200-day moving averages ended the month at 79%, fol-lowing a short correction, and are returning to the one-year high reading set the previous week. 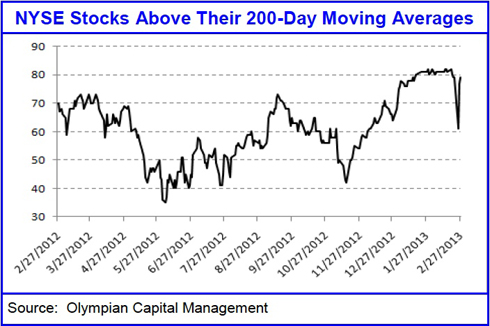 Investor and trader confidence was impacted by the election in Italy. The CBOE S&P 500 Implied Volatility Index (VIX) rose sharply and has been slowly returning toward its previous readings. We note that sentiment was too strong and overdue for a correction.

What To Watch For
Seasonally the market is approaching the end of its positive annual cycle. Higher taxes and an anticipated delay in tax refunds combined with government furloughs and spending reductions have the potential to impact economic growth as well as corporate profits and not-for-profit sustainability.

In our opinion this is a time to become more defensive. While the markets appear to be discounting the sequestration and may actually be embracing the spending cuts. Since the political war continues in the nations capital the reduction of spending should lead to the eventual taming of debt, which ultimately will keep the United States from becoming like Greece, Italy and Spain, among others.

All of these cross currents and changing conditions requires more attention to detail as well as creativity by investment managers. We are closely monitoring the situation and making adjustments to lower risk while seeking to provide profits. If you have any questions about the current market conditions, feel free to contact Michael Levas directly.