In the old days, the role of the buy-side trader was set in stone. The portfolio manager set the firm's investment strategy, and the trader looked for the best trading venue, executed the trade or set of trades, and then sent off the tickets to be cleared. It was a good, honest job — the expectations were clearly defined, there was plenty of work to be done and the compensation was pretty good.

Fast forward to today, past the introduction of a host of disruptive innovations, including electronic trading, algorithms, global exchanges, dark pools and the rise of the quant. In most industries, technological leaps like these come around maybe once a decade. But in the high-speed world of trading, they all converged at once, leaving many traders scrambling to keep up.

Automation has eliminated much of the grunt work, and it has made the role of the trader harder to define. Worse, in this age of black-box trading and intelligent algos, some firms are wondering if they really need traders at all. So could the trader go the way of the stenographer?

Today's buy-side traders do more — in a tighter timeframe — than their predecessors ever did. For starters, modern traders must handle hundreds of times more market data than their forbears did, and they must navigate exponentially more fragmented markets. Fortunately, the new trader hasn't met an efficiency-driving technology solution he doesn't like. 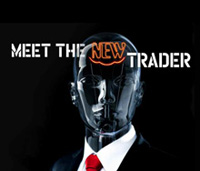 Are the Buy-Side Trader's Days Numbered?As the rise of black-box trading has transformed the industry, buy-side traders have had a tough time trying to remain relevant. Can the buy-side trader survive in the Age of Algos?
"It's much more efficient in terms of time when you can quickly upload hundreds of trades into your system and push a few buttons and they get executed," says Michael Lindh, VP and head of options trading for Nuveen Asset Management. "That part is much more efficient than when I started trading in 2002."

Meanwhile, the new trader's responsibilities also have evolved. "Buy-side firms have progressed from the trader being an order taker to a liaison to the portfolio manager and the sell side and broker community," says Vidis Vaiciunas, a trading and investment operations consultant. "They are part of the whole investment process, helping the portfolio manager decide what they should be executing, how they should be executing and adding value to the investment process."

While the portfolio manager and the trader often have been the same person within smaller hedge funds, the roles now are converging more at other buy-side firms, suggests Vaiciunas, former head of trading for AGF Management, a Toronto-based asset management firm. "At a hedge fund the responsibilities of a trader and a portfolio manager have not changed much because those have been done traditionally by the same person. Because the strategies are much more short term and concentrated now, they are basically the same function," he says. "PMs are making a decision on the fly, which is what a trader has to do."

So what does a trader do all day? While the tools of the trade are different, says Matt Samelson, a principal at market consultancy Woodbine Associates, that's one thing that hasn't changed for traders: They still spend their days constantly on the lookout for the best places to trade. But now there are many more venues, and even more ways to get there. "They're selecting the best means of executing and talking to analysts and the sell side about executing and which algos to use," he relates. "They're trying other means and reaching out to the dark pools."

The trader's new role is a clear result of the march to automation, which has focused on improving the efficiency of trading and providing value for the trader, according to Megan Costello, director of North America client services at Fidessa, the buy-side technology provider. By using automation to take some of the volume out of the trader's hands, the trader now can focus more attention on more complex trades.

"This includes making sure they are executing them in the right venue from a value perspective and understanding the market complexities that affect trades," Costello explains, adding that today's traders "need to interpret much more information — in real time — than they did a decade ago."

Do We Even Need a Trading Desk?

Nonetheless, with the advances in automated trading, some market participants question whether there is a need for traders at all. George Michaels, CEO of G2 Systems, says today's buy-side trading desks are "window dressing." "They're still there, they still look the same, and they're still staring intently at the screen," he acknowledges. "But it's more about marketing and self esteem for the buy-side manager."

Michaels points to his own days on the buy side, as CTO of Carlson Capital from 1999 to 2006. Even then, he says, algorithms did all the trades. "I went to the chief investment officer and asked, why have a trading desk?" Michaels recalls. "All your VWAP orders are being worked by the sell side, and the algorithms are moving the large block of orders — so why are you paying guys half a million a year to sit around and scratch their noses?"

The response? "He said it wouldn't be a hedge fund without a trading desk," Michaels says.

While he wouldn't go so far as to say trading desks are for display only, Tim Grant, managing director at Benchmark Solutions, does expect to see consolidation on the desk. "As markets become transparent in a given asset class, the roles of both trader and salesperson certainly change, and there are fewer people required to service a higher trading volume with lower margins," he explains.

As an example, Grant offers the U.S. corporate credit market for bonds and credit default swaps, which has slowly become more liquid despite some recent dips. "Subsequently, the role of the client manager has become less important, and the need for a trusted partner and source of value-added advice has become more prevalent," says Grant. "Clients have relationships with firms rather than individuals, and as we cross a new frontier of transparency, with the possibility of real-time pricing, this will only act as a catalyst to that process."

According to Michaels, "When the old guard retires, there will be specialized groups that will need a trading desk for complex orders." But, he adds, "There will be firms that don't need the overhead of five guys with Bloomberg terminals on a fancy trading desk with a nice view of downtown Dallas. That's a thing of the past."

In fact, the transition already is occurring, Michaels says. More and more hedge funds are launching with a few hundred thousand dollars in assets as opposed to the more traditional tens of millions, he notes. "Now they are launching in people's apartments in virtual offices, and investors are expecting less and less to see trading desks."

Phil Albinus is the former editor-in-chief of Advanced Trading. He has nearly two decades of journalism experience and has been covering financial technology and regulation for nine years. Before joining Advanced Trading, he served as editor of Waters, a monthly trade journal ... View Full Bio