50%
Tweet
Investors and traders continue to defy the seasonal factors that normally impact the market. Auto sales are up, jobless claims are down, but the probability of a correction remains high.

Many analysts and media types began May with the popular phrase “Sell in May and go away,” a proverb tied to the annual seasonal cycle for stocks, in which the period from May to October represents the weakest time of year. However, for the seventh consecutive month the S&P 500 Index (SPX—1,643.38) was higher, rising 2.1%, and setting new all-time highs along the way. The Dow Jones Industrial Average (DJIA—15,248.12) gained 1.9% for the month and the Nasdaq Composite Index (COMPQ—3,469.22) was up 3.8%. Also recording gains and setting new all-time highs was the Russell 2000 Index (RUT—987.62), jumping 3.9%.

Also dropping last month have been some industrial metals prices. Copper, which is strongly tied to home and commercial buildings, saw its futures price sink 6.7% in May, despite a pickup in the real estate market.

While demand remains relatively strong for energy, especially from some emerging markets and China, crude oil prices have been in a narrowing trading range. Increased production of natural gas, which is rising in price, is diverting demand away from West Texas Intermediate and Brent crude products, even as natural gas prices are rising. This is due to the very low comparative level, providing wouldbe buyers with a cheaper alternative. 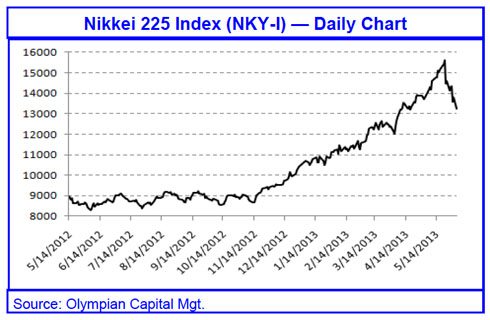 Agriculture prices were mixed. Lean hogs were up, setting a new 9-month high. Corn was volatile, spiking both higher and lower. Oats rose sharply and then collapsed the last day of the month. Wheat was higher and cocoa climbed to a 5-month high.

One of the factors pushing commodity prices, especially the metals, lower has been the strengthening US Dollar.

The “Green Back” resumed its upward trend last month. The Euro remains under pressure as economies in the euro zone remain weak. While US growth is positive, the rate of growth is weak or anemic. However, on a relative basis it is positive versus many countries across the pond, which is resulting in increased demand for the currency. Also adding to the demand for US Dollars has been the drop in gold, which serves as a currency function itself.

Meanwhile, US treasuries have been a bit volatile. Conflicting testimony from FOMC Chairman Bernanke and the recent release of the FOMC minutes has traders confused over when the Fed might tapering off its stimulus. Interest rates have been a bit “bouncy” lately, which is also impacting the currency market.

Meanwhile the CBOE 10-year T-note Yield Index (TNX—21.61) has risen to a 14-month high on expectations that the Fed will tapper its quantitative easing sooner rather than later.

Before leaving this section, it would be remiss of us not to mention the declining that the decision to devalue the Japanese Yen (JPY), which has been one of the leading factors in pushing both the dollar and the NKY higher.

The big focus has been on employment. Could the US economy continue growing jobs in the wake of government sequestration, higher tax rates, slower growth in Europe, and new scandals from Washington. Non-farm payrolls rose 175,000 in May, beating the consensus estimate of 160,000 new jobs. The unemployment rate rose to 7.6% from 7.5% as people that previously gave up on looking for new jobs began searching again. One negative point to the report was that average hourly earnings were unchanged.

Meanwhile, Germany, Europe’s largest economy, reported that its newly unemployed figure was four times analysts expectations. Other countries in the euro zone, say their unemployment levels rise. For the first quarter of 2013 Spain’s unemployment rate rose to a record 27.2% or more than six million people.

Back in the states inflationary pressures re-main in check and don’t seem to be a threat to the recovery at this time.

Despite what was an apparent short-term correction this past week, the US equities market remains positive. There is evidence that leadership is developing in some growth areas, including traditional industrial stocks. For example, we have seen a pickup in the automotive sector, and other similar groups. Meanwhile, there has been weakness in some of the defensive sectors and groups, such as the utilities. The NYSE Advance-Decline Index remains in positive formation and money continues to move into stocks. 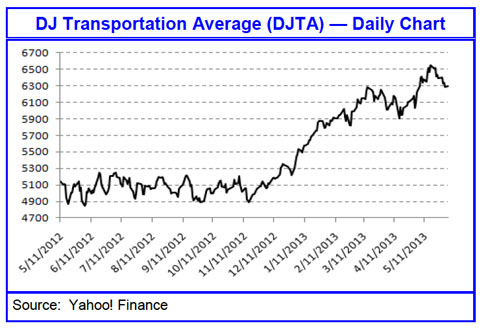 The transportation group continues to move higher month/month. The Dow Jones Transportation Average (DJTA—6,343.79) was up 1.8% during the month, ending below its best levels (and new all-time high), but holding with the positive trend channel.

Investor and trader sentiment remains relatively complacent. Despite a short uptick in the CBOE S&P 500 Implied Volatility Index (VIX—15.14), which remains above its 200-day moving average, verbal concerns about the market are not necessarily translating into dollar concerns.

Michael J. Levas has been in the investment management business for over 25 years and is the founder, senior managing principal & chief investment officer at the Olympian Group of Investment Management Companies. Prior to Olympian, he was a VP and Portfolio Manager in the ... View Full Bio