50%
Tweet
US equity markets soared to new highs in March, while the conflict in Cyprus raised concerns that led investors to flee the eurozone and seek safety in US credit and debt markets, writes Michael Levas,, CEO of Olympian Capital Management.

Despite several setbacks and hiccups, the US equities markets rose in March, which added to the gains over the previous two months. The US Dollar also rose and energy prices edged higher. These positive signs were in the wake of negative events.

While the rise in the DJTA is indicative of economic expansion, the rise in DJUA is more defensive in nature. However, there may be a several explanations for DJUA‟s appreciation.

Market volatility hit a low and then rose as concerns about Cyprus impacted markets and various asset classes worldwide. Demand for equities may be the result of a “fight to safety,” which will be evident shortly.

Gold prices, normally rise during periods of such turmoil, and the spot price did gain 1.1% month/month basis, but closed 1.2% below the intra-month highs. This is a conflict for many investors. For the month silver, which has led gold, was slightly lower.

Energy prices were on the rise. West Texas Intermediate crude oil futures (CL/J3—$97.20) rose 5.8% during the month but Brent Crude dropped 1.2% during that period, but was well above the intra-month lows. Another conflict between those con-tracts.

Gasoline prices were lower despite the rise in WTI crude. This is a positive for consumers, who earlier this year faced higher costs at the pump. 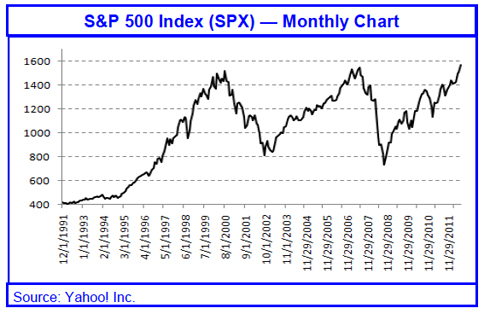 For most of the month agriculture prices were on the rise, however as the month came to a close prices turned sharply lower, with some contracts erasing all of their gains. Corn, soybean meal, soybeans, and wheat futures sold off sharply last Thursday. Sugar prices have also been falling for more than half the month.

The conflict in Cypress, which left depositors across many European stressed countries worried as the Eurozone pushed the small island nation to seize portions of depositors assets, up to 40% of the savings of large depositors. This may have set a new precedent to capture the assets of people in troubled nations in order to reduce the risk to the larger economic conglomerate.

Since setting a low at the start of February, the US Dollar Index (DX/Y—83.14) has been on a rise, climbing to an eight month high. Conversely the Euro has dropped to a 4-1/2 month low. Analysts are anticipating that a movement of currencies from troubled nations out of the eurozone to safer denominations will continue, which may support the Dollar and other US based assets.

The “Flight to Safety” is evident in the US Credit and debt markets. There was an expectation that interest rates would rise this year, however the purchase of US instruments has pushed yields lower once again. After reaching a high of 2.09% in early March the 10-year T-note has fallen back to 1.85%.

Last month we wrote that the markets appeared to be embracing the government sequestration. The evidence continues to mount supporting this thesis, both in the equities and Treasury markets. A look at the yield curve (shown below) shows a positive upward sloping curve, even though the current curve (solid black line) is lower than the reading year end as demand for US debt remains strong and investors remain confident.

The final revision for 4Q Gross Domestic Product (GDP) was slightly disappointing, falling below economists consensus estimates. Expectations for 1Q reading are also weak, especially as furloughs and cut backs on government contracts are likely to lower the growth rate by at least 0.1% for the first quarter, since it only impacted the final month of the period.

There is evidence that the rate of economic growth has been slowing. FedEx Corp. (FDX), a benchmark in DJTA, reported disappointing earnings for the past quarter, and also lowered forecasts as demand for shipments on a global basis appears to be waning. Despite that, investors have been discounting those types of events, and don‟t seem to care about individual stories, concentrating more on the bigger picture.

As we noted earlier, stocks remains relatively strong, with many of the benchmarks setting new all-time highs. SPX finally closed at a new high on the last trading day of March, while DJIA has set many new highs. RUT also set new highs, pulled back a bit, and then rose to test those highs. Up until recently, DJTA had been setting new highs, but was significantly impacted by the downturn in FDX.

The NYSE and Nasdaq Advance-Decline and New High-New Low indices have also been positive. The Percentage of stocks trading above their respective 200-day moving averages on the NYSE has been hovering near the 80% level, very bullish. 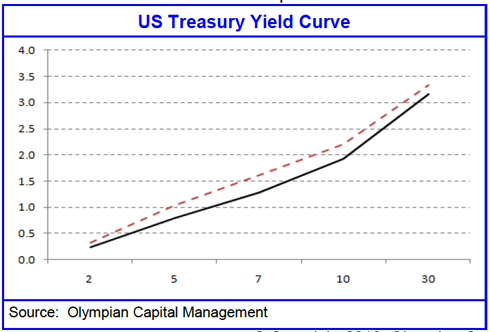 Michael J. Levas has been in the investment management business for over 25 years and is the founder, senior managing principal & chief investment officer at the Olympian Group of Investment Management Companies. Prior to Olympian, he was a VP and Portfolio Manager in the ... View Full Bio