50%
Tweet
The financial markets escaped October -- the most feared month for investors -- with modest gains, but indicators are mixed for November.

Despite the government shutdown and approaching the brink of default, US stocks recorded gains last month. In fact the equities markets were generally higher around the globe. Commodity prices have been declining and there was a bit of a shakeup in the currency markets. Economic conditions continue to improve, raising the probability that the Fed will taper is stimulus activities sooner rather than later.

October historically is the most feared month of the year for investors, with most market crashes occurring during that month. However, while investors were shaken, their collective conviction was not stirred. After setting a low on Oct. 9th, investors used the decline as an opportunity to buy, which resulted in new highs being set at the end of the month. While prices did rise, there has been several divergences.

Precious metals continued to decline, resuming their negative trend. The Gold Dec 13 Futures (GC/Z3—$1,289.00) rose from the mid-October lows but ended down 0.4% month/month, continued to decline month-to-date and is nearing the October lows. Meanwhile the Silver Dec 13 Futures (SI/Z3—$21.50) had a similar but less impressive pat-tern, ending October virtually unchanged.

One of the benefits of declining commodity prices is lower inflation rates and improved discretionary spending for consumers. West Texas Intermediate Crude Oil Dec 13 Futures (CL/Z3—$94.35) dropped 5.9% last month and Brent Crude Dec 13 Futures (CO/Z3—$105.12) rose slightly but has resumed the decline since the month began. As a result, gasoline futures plunged and the average price at the pump is $3.19/gallon, the lowest price in 2-1/2 years.

The US Dollar rose sharply shortly after an agreement to reopen the government and raise the debt ceiling, even if it is only a temporary fix. The US Dollar Index (DXY—81.28) ended the month unchanged, but jumped 1.6% from the lows set on October 25th. As of Friday the index is 2.8% above the previous mentioned lows.

The "Greenback" was strong versus the Euro, Canadian Dollar, and Swiss Franc. It was also higher against the British Pound, Australian Dollar, and New Zealand Dollar and slightly higher versus the Japa-nese Yen.

Now that Janet Yellen is the favored choice and submission as the next Fed chief, focus has returned toward the Feds actions and expectations. As good economic news emerges, concerns that tapering of economic stimulus causes investors to pause their accumulation of assets. This was notable in the latest report on Gross Domestic Product (GDP).

There has been some progress with respect to economic activity on a global basis and here is the United States. The first release for the 3Q GDP showed an annual growth rate of 2.8% matching the reading set during 3Q 2012. It was also the best reading in a year.

Inflationary pressure remains subdued. New vehicle sales have been strong, but in generally we have noted a small pull back in consumer discretionary spending. Many attribute this the launch of the Affordable Care Act (a.k.a. Obamacare). 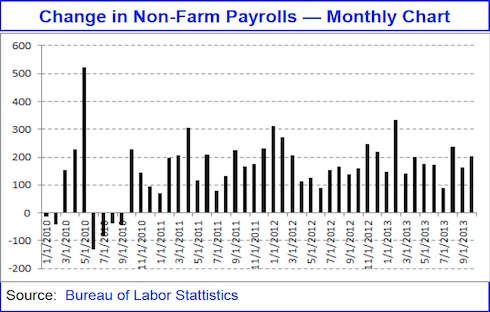 The partial shutdown of the government and the realization that US was hours from default caused a short-term bounce in interest rates and a sharp drop in confidence. The Consumer Confidence Index dropped to 71.2 from 80.2 in September.

A positive divergence was noted by Friday's release of the October Employment Situation Report. According to the Department of Labor there were an estimated 204,000 jobs created last month, surpassing the 120,000 estimate. Additionally, the September reading was adjusted higher. However, the government shutdown resulted in an uptick in the unemployment rate to 7.3% from 7.2% in September.

The Dow Jones Transportation Average (DJTA—7,017.34) was very strong, soaring nearly 6% last month. As we have noted before, the DJTA is an important leading indicator for the market and economy.

While the benchmarks have been positive, we note that there is a lack of confirmation from several internal market indicators. Trading activity is weak on up days and more active on down days. The advance-decline indices have not been impressive. The percent of stocks trading above the 200-day moving averages fell to 65.05% on the NYSE and 66.86% for the Nasdaq, well below the highs set in August.

Earlier we also mentioned that there has been a focal shift to larger companies from smaller ones, which represents a more conservative move.

This is the seasonally strong period of the year, which should bode well for US equities. Short-sellers may be forced to repurchase securities that were borrowed and sold as prices continue to rise. This is partly the result of a strong credit market which has spurred stock repurchases, dividend increases, and corporate takeovers.

Traders and investors remain complacent, although there was signs of apprehension during the government shutdown. However, the CBOE S&P 500 Implied Volatility Index (VIX), also known as the fear index, returned to recent lows after spiking above the 20% level, the highest reading since June.

There has been divergences and move to-ward less risky securities. Meanwhile, the bench-marks are at or near either 13-year or all-time highs, increasing the probability for a correction. We continue to anticipate that prices will appreciate, but we note that there has been a lack of a 10% correction this year. We are positive but remain defensive given the slightly elevated risk and probability of correction.